India’s ‘Act East’ policy is a diplomatic initiative to promote economic, strategic, and cultural relations with the vast Asia-Pacific region. The Act East policy is considered as the modern version of the Look East Policy which was launched in 1991 by then Prime Minister P.V. Narasimha Rao.

"Look East Policy" of India was launched by the former Prime Minister  P.V. Narasimha Rao in 1991. The main focus of this policy was to shift the country's trading focus from the west and neighbors to the booming South East Asian countries. This policy continued till the formation of the NDA government in 2014 after which, the newly formed government under PM Narendra Modi upgraded it to “Act East Policy”. The “Act East Policy” was launched at the East Asia Summit in Myanmar in November 2014.

1. Promote economic cooperation, cultural ties, and develop a strategic relationship with countries in the Asia-Pacific region through continuous engagement at regional, bilateral, and multilateral levels.

2. To increase the interaction of the North-Eastern Indian states with other neighboring countries.

3. To find out the alternatives of the traditional business partners like; more focus on the Pacific countries in addition to the South East Asian countries.

5. Experts say that under the “Act East Policy” the government is relying on the 3 C's (Culture, Connectivity, and Commerce) to develop better relations with ASEAN nations.

In order to ensure the success of the policy, the Modi government is putting steady efforts to develop and strengthen connectivity of Northeast Indian states with the ASEAN region through people-to-people contacts, trade, culture and physical infrastructure (airport, road, power, telecommunication etc.). Some of the major projects include Kaladan Multi-Modal Transit Transport Project, the India-Myanmar-Thailand Trilateral Highway Project, Border Haats and Rhi-Tiddim Road Project, etc.

India-Japan relations are experiencing a good phase and its proof is that Japan is helping India in many infrastructure projects. These projects include Delhi Metro Corporation and the upcoming Ahmedabad -Mumbai bullet train project.  Indian export to Japan was around Rs. 21.36 billion per month in 2017. 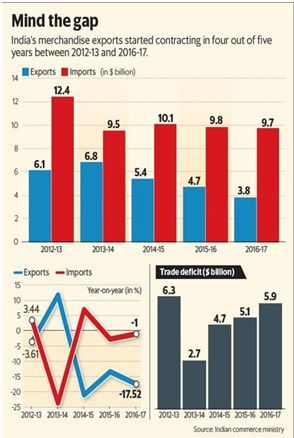 The ASEAN-India Plan of Action for the period 2016-20 has been adopted in August 2015 which identifies concrete initiatives and areas of cooperation along the three pillars of political-security, economic and socio-cultural.

India and ASEAN have a very good bilateral trade of US$76.52 billion USD in 2014-15 and US$ 71.6 in 2016-17. The share of bilateral trade with ASEAN is almost 10% of India’s total trade. ASEAN is a very strong economic bloc that has combined population of 644 million, combined GDP of $2.7 trillion and a Per Capita Income of $4,200. If you combine India and ASEAN, they have a $5 trillion economy, third-largest in the world after China and the USA. 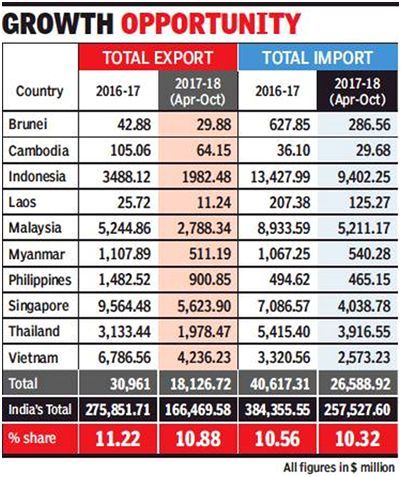 In order to harness the benefits of the “Act East Policy”, India has upgraded its relations to a strategic partnership with JAPAN, Australia, Vietnam, Indonesia, Malaysia, Singapore and Association of Southeast Asian Nations (ASEAN), Republic of Korea (ROK) and forged close ties with all countries in the Asia-Pacific region.