The District Courts of India are the district courts of the State governments in India for every district or for one or more districts together taking into account the number of cases, population distribution in the district.

They administer justice in India at a district level. These courts are under administrative control of the High Court of the State to which the district concerned belongs. The decisions of District court are subject to the appellate jurisdiction of the High court. 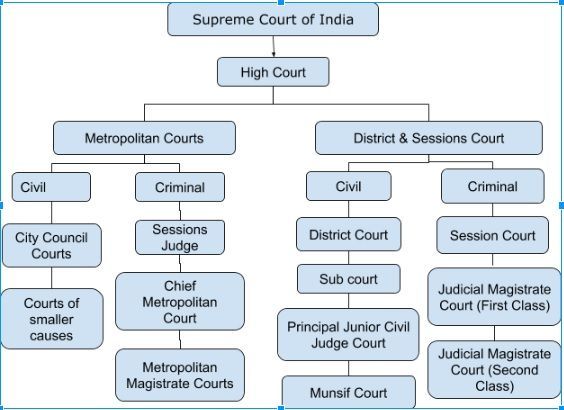 This is an extension of the above supervisory and appellate jurisdiction. It states that the High Court can with draw a case pending before any subordinate court, if it involves the substantial question of law. The case can be disposed of itself or solve the question of law and return back to the same court.

In the second case the opinion tendered by High court would be binding on the subordinate court. It also deals with matters pertaining to posting promotion, grant of leave, transfer and discipline of the members there in.

High court has complete authority and control over its officers and employees. In this regard it appoints officers and servants to be made by Chief Justice or such other judge of High Court as the Chief Justice may direct. However the Governor of the state may by rule require that in such cases as may be specified in the rule no person not already attached to the court shall be appointed to any office connected with the court except after the consultation with the state public service commission.

The subordinate courts include the District Judges, Judges of the city civil courts, Metropolitan magistrates and members of the judicial service of the state.

Appointment of the District Judges as per Article 233,

1). Appointments and promotion of district judges in any state shall be made by the Governor of the state in consultation with the high court exercising jurisdiction in relation to such state

2). A person not already in the service of the Union or of the state shall only be eligible to be appoint a district judge if he has been for not less than 7 years an advocate or a pleader and is recommended by the high court for appointment.