What types of toxins are present in Tap water?

What type of toxins and chemicals are present in tap water, why tap water is injurious to health or not suitable for drinking these days, what type of diseases are caused due to these chemicals etc. are discussed in this article. 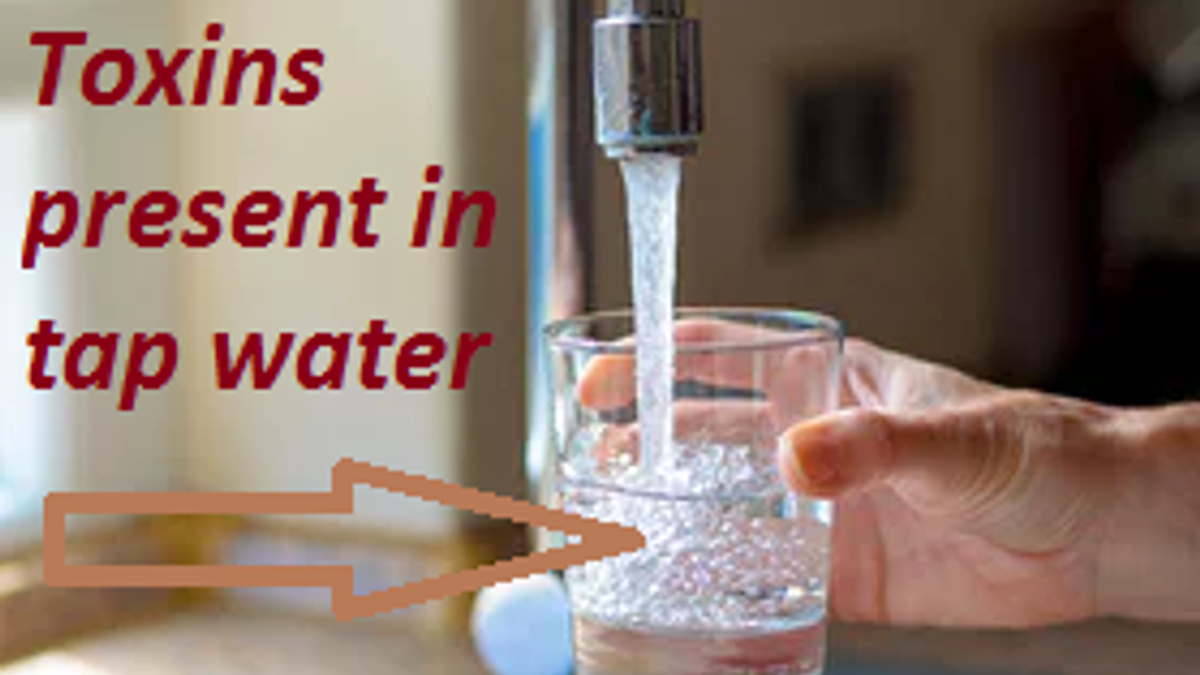 What types of toxins are present in Tap water?

Water is important for life without it also life is not possible. But nowadays the quality of water is deteriorating and is a matter of concern across the world. Pure water is one of the greatest natural resource in the world. Do you know that metabolic functions of our body depend upon water? Since ancient time civilisations are built around the abundant supplies of water.

Water is contaminated due to industrial effluents, deforestation, excessive use of pesticides, improper waste disposal methods, leaky storage tanks etc. Therefore, the water that flows through taps may contain several contaminants and could affect health. Let us study through this article about the toxins present in the tap water.

Toxins present in the Tap water

In 1940's as a process fluoride is added in drinking water to help in reducing tooth decay. It is highly potent free radical in the body and damages neurological tissues, injures the immune system, hampers the functioning of thyroid gland and calcifies the pineal gland. National Research Council of the National Academies report says that “Fluoride is an endocrine disruptor in the broad sense of altering normal endocrine function". Due to its toxicity several countries have banned water fluoridation.

It is a powerful cancer causing agent but despite being poisonous, it is used in industrial processes. Poisoning of arsenic can cause vomiting, abdominal pain, diarrhoea and long term exposure may lead to skin cancer, lung cancer, bladder cancer etc. Do you know that in Taiwan "Blackfoot disease" is caused due to arsenic? In this disease blood vessels damage and die.

It is the most common chemical used to disinfect water and make it useful for cleaning products and swimming pool. It is added to drinking water for the purification. However, when used excessively it can harm health. Do you know it is highly reactive and bonds with water to produce poisonous hydrochloric acid? One of the most dangerous forms of chlorine includes chlorine vapours and chloroform gas.

Chloroform gas is known to cause acute dizziness, nausea and fatigue. Unfortunately, when chlorine is not filtered out of the water and consumed it via tap water, can destroy the natural micro flora throughout the body. It can causes respiratory problems, damage cells, affect immunity, cancer, memory loss etc.

Even the presence of heavy metals like mercury and lead in the water is dangerous for health. Lead is released in water due to old corroded water pipes. It is toxic to almost every organ and affects children the worst. It can cause problem in the development of children, learning disabilities, brain damage etc. If ingested during pregnancy, it can cause premature birth. It can also lead to prostate cancer, autism, problems in reproduction, damage kidneys etc.

On the other hand mercury is released into the air by industries like thermal power plants and falls to the earth through rain or snow. If ingested can cause severe health problems like blindness, nerve damage, brain damage, impairment of motor functions, headaches, weakness, tremors, memory loss, skin rashes etc.

PCBs stands for polychlorinated biphenyls. They are used for industrial purposes like in machinery, oil, paints, electronics, fluorescent lights etc.

In 1979, PCBs are banned but are still present in landfills and pose a danger to the environment. They have been found in snow and sea water thousands of miles from where they were produced. Some tests are conducted in animals and found that it can cause cancer, affect nervous and endocrine system.

We all know that pesticides are used by the farmers to kill the pests that damage crops. During rain excess of pesticides seep into the soil or run off into the rivers and lakes during rains. If ingested, can cause several types of cancer, liver diseases etc.

DDT was used as an insecticide in 1940s to combat insect-borne diseases like malaria and typhus. Do you know that until 1965, HCB, or Hexachlorobenzene, was used as a pesticide? Now, the production has been banned. Smaller doses can lead to liver and skin disease and large doses may lead to death.

MtBE is methyl tertiary-butyl ether which is a gasoline additive. It can render large quantities of groundwater completely undrinkable. The health effects are not understood but some animal tests have shown the symptoms of kidney damage, problems with foetal development etc.

These are the toxins that contaminate tap water and make it unfit for drinking.