World Haemophilia Day 2021: It is observed on 17th April and the day was started by the World Federation of Haemophilia (WHF). An effort for better diagnosis and access to care for those people who remain without treatment, to raise funds for the people who are suffering from this disease and are not able to afford treatment.

It also provides an opportunity to discuss the disease with friends, family, colleagues, etc., and to support the patients suffering from Haemophilia disease.

The theme of World Haemophilia Day 2021 is  “Adapting to change: sustaining care in a new world". Living during a pandemic can pose several challenges, not only for our health but also for our mental health and wellbeing. This year the day is a platform across the world for exploring the community's resilience and how we will overcome this new challenge as we have overcome other challenges in the past.

The theme of 30th World Haemophilia Day 2020 is "Get + Involved". The theme encourages patient, family member or caregiver, a corporate partner, a volunteer, or a healthcare provider, etc. to help increase the awareness about Haemophilia disease an inherited bleeding disorder, and an urge to make access to adequate care possible everywhere in the world.

The theme of 29th World Haemophilia Day 2019 was “Outreach and Identification”. To concentrate on reaching out and identifying new members of the bleeding disorders community.

World Haemophilia Day: History
World Haemophilia Day was started by the World Federation of Haemophilia in 1989 and 17 April, was chosen to celebrate it in honour of the founder of World Federation Haemophilia Frank Schnabel's birthday. Actually, Haemophilia was discovered in about the 10th century, when people started to take a serious interest, especially in males, who after minor injuries due to bleeding caused death. At that time this disease was known as Abulcasis. But, due to limited technology, it was not cured. Especially, that time this disease was common in European royal families and was treated with aspirin which further thinned the blood and the condition becomes worse. Then, Dr. John Conrad Otto of Philadelphia in 1803 began to study people called "bleeders" and said that it is a hereditary illness that passes on to males by their mothers. In 1937, haemophilia genetic disorder was divided into two types: A and B. But no proper treatment was invented till that time.
Then, 17 April was chosen to raise awareness among people about Haemophilia disease on the occasion of the founder of WFH birthdays. The day encourages people, increase awareness to collect funds for the treatment of this disease for those people who can't afford it.

What is Blood Pressure and how is it measured?
World Haemophilia Day: Celebration
On 17th April every year worldwide, World Haemophilia Day is celebrated to raise understanding and awareness of this genetic disorder and other linked bleeding disorders. Many people organise awareness-raising campaigns and perform several activities to inform the general public about Haemophilia disease. Even the employees of various health organisations participate in the events. The main issue with this disease is that people suffering from Haemophilia won't get proper treatment or sometimes no treatment. On 17 April 2020, landmarks and monuments in Australia and around the world will support World Haemophilia Day by changing their lighting red in the night.

In India, on this day various events are organised by groups of people in several states. Indian Haemophilia Foundation situated in New Delhi in association with the Ministry of Health and Family Welfare also celebrates this day by providing medical facilities to the needy and increases awareness about this disease. Program is also conducted to take and update decisions at the national and the state level about the sufferings and disorder of the Haemophilic community.
About Haemophilia Disease 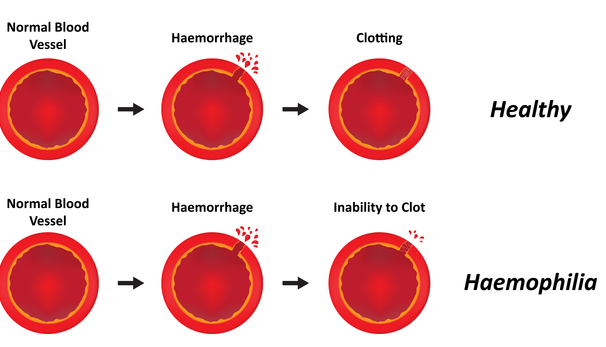 Source: www.ghr.nlm.nih.gov.com
- Haemophilia is an inherited blood disorder disease in which blood does not clot properly.

- It is caused due to defects in the blood vessels, the coagulation mechanism, or the blood platelets and by a deficiency in a gene that resolves on how the human body will make factors VII, IX, or XI.

- The genes are found on the X chromosome, which makes Hemophilia a disease of X-linked recessive.

- A person suffering from this disease bleeds spontaneously. After injury or surgery, a person may bleed for longer than a healthy person.

- The blood coagulation mechanism is a process that transforms the blood from a liquid into a solid and involves several different clotting factors. In this mechanism, fibrin is generated and together combine with the platelet to stop the bleeding.

- If coagulation factors are missing or deficient in the body then blood does not clot properly and bleeding continues.

- Haemophilia A patient is treated by prescribing a hormone desmopressin.

- Haemophilia B patient is treated by infusing the patient’s blood with the clotting factors of a donor.

- Haemophilia C patient is treated by plasma infusion which ceases down profuse bleeding.

What is Thalassemia Disease?

Important Days and Dates in April 2021