Get here the Marking Scheme for CBSE Class 10 Social Science Board Exam 2017. This marking scheme contains the key points or value points to all questions along with the mark wise breakup. Students can download this marking scheme in PDF format from the link given in this article. 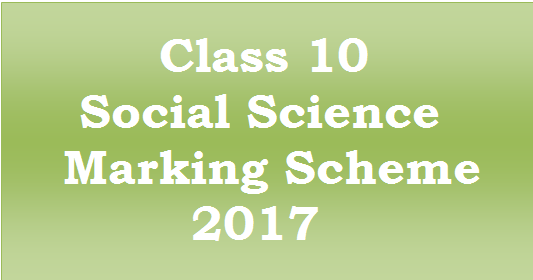 Marking Scheme for CBSE Class 10 Social Science SA-II Board Exam 2017 is available here. This marking scheme released by the CBSE itself, has key answers (or values point) along with mark wise break up which gives better idea about the division of marks inside a question.

Every year CBSE Board releases the marking scheme that used while checking the answer booklets of CBSE Board Examinations. CBSE does this with a purpose of helping its students get an idea to frame a perfect answer that contains every important key point.

The word limit while answering questions of CBSE board examination is the most crucial factor. With the help of key answers given in marking scheme, students will easily understand the criteria of word limit of answers to be written in CBSE Board Exams.

A few sample questions and their key answers from the CBSE Class 10 Social Science Board Exam 2017: Marking Scheme, are given below:

Q. Name the writer of the book ‘Hind Swaraj’.

The writer of the book ‘Hind Swaraj’ is Mahatma Gandhi. (1)

Q. Name the river related to National Waterways No. 2.

The river related to National Waterway No.2 is River Brahmaputra . (1)

Q. How does the use of money make it easier to exchange things ? Give an example.

A person holding money can easily exchange it for any commodity or service that he or she might want.

Example :- The shoe manufacturer will first exchange shoes that he has produced for money and then exchange the money for wheat.  (1)

Any other relevant example.

Q. Describe any three economic hardships faced by Europe in the 1830s.

Economic hardships faced by Europe in the 1830s:

i. Enormous increase in population was seen all over Europe.

ii. In most countries there were more seekers of jobs than employment.

iii. Population from rural areas migrated to the cities to live in over crowded slums.

iv. Small producers in towns were often faced with stiff competition from imports of cheap machine made goods from England.

v. In Europe where the aristocracy still enjoyed power, peasants struggled under the burden of feudal dues and obligations.

vi. The rise of food prices as a result of bad harvest led to wide spread pauperism in town and country .

vii. Any other relevant point.

Q. Analyse the role of popular struggles in the development of democracy.

Role of popular struggles in the development of democracy :

i. Democracy evolves through popular struggles.

iii. These conflicts and mobilizations are based on new political organizations.

iv. Any other relevant point.

Q. How do Multi-National Corporations (MNCs) interlink production across countries? Explain with examples.

i. There are varieties of ways in which the MNCs are spreading their production and interacting with local producers in various countries across the globe.

iii. MNCs are exerting a strong influence on production at the distant locations.

iv. As a result, production in these widely dispersed locations is getting interlinked.

vi. Any other relevant point.

Q. ‘‘It  is  very  difficult  to  reform  politicsthroughlegal ways.’’Evaluate  the statement.

‘It is very difficult to reform politics through legal ways’:

i. Carefully devised changes in law can help to discourage wrong political practices and encourage good ones.

ii. Legal constitutional changes by themselves cannot overcome challenges to democracy. (Example of LBW in cricket may be given).

iii. Any legal change must carefully look at what results it will have on politics. Sometimes the result may be counterproductive.

v. Laws that give political actors incentives to do good things have more chances of working.

vi. The best laws are those which empower people to carry out democratic reforms.

vii. Democratic reforms are to be brought through political practices. Therefore the main focus should be on the ways to strengthen democratic practices.

viii. Any other relevant point.