CBSE sample papers for Class 10 Social Science Board Exam 2018 has been released by the board and is available here in PDF format that can be downloaded easily. This sample paper will make you acquainted with the latest exam structure to be followed in Board Exams 2018. 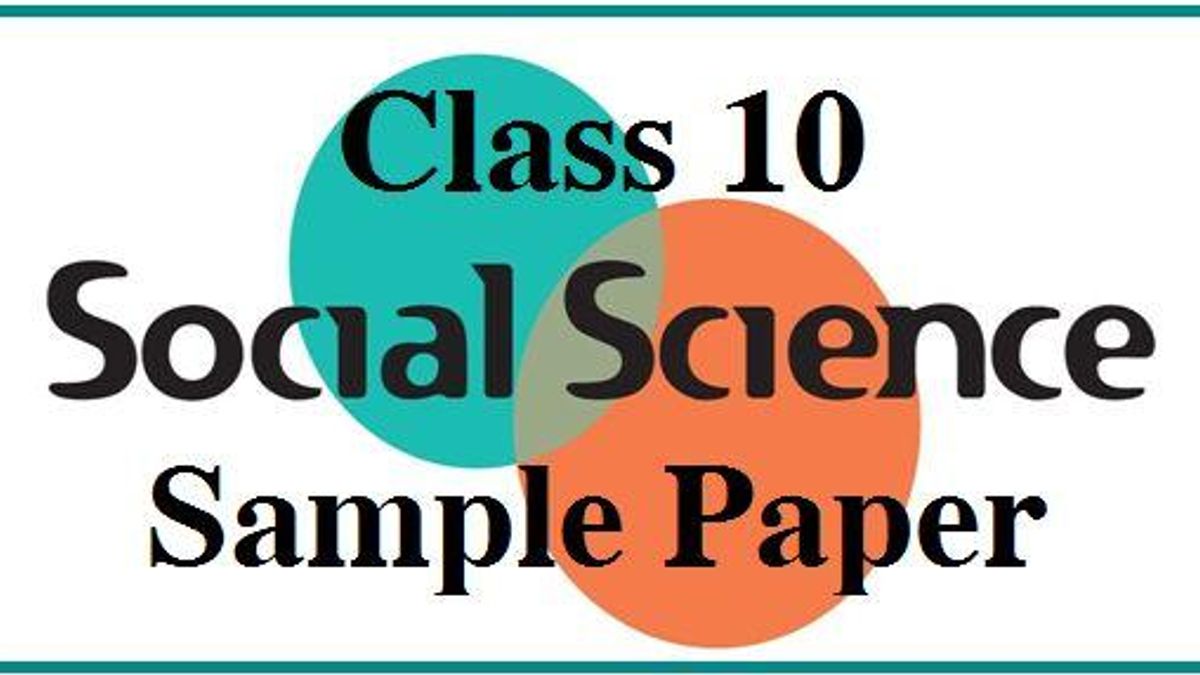 Jagranjosh brings here the CBSE Sample Paper for Class 10 Social Science Exam 2018. Released by the CBSE Board, this sample question paper will help students to know the latest exam structure and prepare accordingly.

CBSE released the sample paper for Class 10 Social Science Exam 2018 in order to make students familiarized with the latest examination pattern. The same pattern will be followed by the board while setting question paper for Board Exam 2018.

The question paper format followed in this sample paper is as per the following  distribution:

Students can check the hints and answers of all questions asked in this paper, from the link given at the end of the question paper.

Complete CBSE Sample Paper for Class 10 Social Science Exam 2018, is given below:

i. The question paper has 27 questions in all.  All questions are compulsory.

ii. Marks are indicated against each question.

iii. Questions from serial number 1 to7 are very short answer type questions. Each questioncarries one mark.

iv. Questions from serial number 8 to18 are 3 marks questions. Answer of these questions

should not exceed 80 words each.

v. Questions from serial number 19 to 25 are 5 marks questions. Answer of these questions

should not exceed 100 words each.

vi. Question numbers 26 & 27 are map questions from History with 1 mark each.

vii. Question number 28 is map question of 3 marks from Geography.

provided.  After completion the work, attach the map inside your answer book.

ix. Questions at Serial Number - 20, 22, 24 & 25 have Internal Choice. Attempt any one optionout of the given in each of these questions.

Question 1. Which power dominated the nation-building process in Germany?  (1)

Which idea, other than economic exploitation, was behind French colonisation of

State the hotly debated issue around which the novel Indulekha revolved.

Question 3. Wind energy received in abundance in western Rajasthan and Gujrat has not been so far utilised and developed to the maximum. It falls in which category of resources?  (1)

Question 4. Write any one prudential reason for which power sharing is desirable.  (1)

Question 5. Identify the condition when both the parties in a barter economy have to agree to sell and

buy each other‟s commodities? What is it called?  (1)

Question 6. A group of companies in India wishes to import high quality ACs from South Korea but have to pay a huge import tax on them which would make the ACs very expensive leading to a decline their sale. Ascertain the role of the import tax in this situation.  (1)

Question 7. Sania buys a packet of biscuits and finds detail about ingredients used, price, batch number etc. printed on it except the expiry date. Under which right of the consumers she can claim to know this information from the manufacturer?  (1)

Question 8. Ideas of national unity in early-nineteenth-century Europe were closely allied to the ideology of liberalism. What did it mean for the middle class in France? Explain. (3)

Question 9. “Not everyone welcomed the printed book, and those who did also had fears about it.” Justify the statement by giving three arguments. (3)

Question 10. Explain any three reasons for which the multi-purpose projects and large dams have come under great scrutiny and opposition in the recent years. (3)

Question 11. Mohan owns a farm in Uttar Pradesh; he wishes to cultivate either Jute or Sugarcane. He shall cultivate which crop out of these two keeping in mind the conditions required for their growth? Explain. (3)

Question 12. Distinguish between the Unitary and Federal systems of government. (3)

Question 13. “Three factors are crucial in deciding the outcome of politics of social divisions.” Elaborate upon the statement. (3)

Question 14. Do democracies lead to peaceful and harmonious life among citizens? Clarify. (3)

Question 16. Amrita is a government employee and belongs to a rich urban household whereas Rani works as a helper on a construction site and comes from a poor rural household. Both have a crisis at home and wish to take loan. Create a list of arguments explaining who between the two would successfully be able to get the loan from a formal source. Why?  (3)

Question 17. How can the government ensure that globalisation is fair and its benefits are shared in a better way by all? (3)

Question 18. Create an advertisement for an online Consumer Awareness campaign to help consumers know their rights and save themselves from exploitation. (3)

Question 19. Illustrate with examples that food offers many opportunities of long-distance cultural exchange.  (5)

“Even before factories began to dot the landscape in England and Europe, there was large-scale industrial production for an international market in the country side.” Elucidate.

“The function and the shape of the family were completely transformed by life in the industrial city.” Clarify the statement with regard to urbanization that happened in England in the 18th century.

Question 20. How did people belonging to different communities, regions or language groups in India develop a sense of collective belonging? Elucidate.  (5)

How did the Non-Cooperation Movement spread to the countryside and drew into its fold the struggles of peasants and tribal communities? Elaborate.

Question 21. Describe the significance of Textile Industry in India with specific reference to Cotton industry.  (5)

Question 22. India has one of the largest road networks in the world, aggregating to about 2.3 million km at present. On what basis roadways have taken an edge over railways? Explain. (5)

“The pace of change has been rapid in modern times and has impacted the ways of communication as well.” In light of the given statement explain the role of a variety of means of communication that are used in India in the currents times.

Question 24. Political parties fill political offices and exercise political power. But they do this by performing a series of important functions. Describe any five of them.  (5)

Political parties need to face and overcome a number of challenges in order to remain effective instruments of democracy. Write about any two of such challenges while citing appropriate examples.

Question 25. Rohan works in a bank as a clerk while Sumit works on a construction site as a labourer. Describe difference in their conditions of work and judge the benefits and drawbacks of

working in the respective sectors. (5)

Reema works as a shift technician in Mehta Textiles Ltd. whereas Shirin works as a Sales Executive in Kashvi Fashion Showroom. Identify the sectors of economy in which Reema and Shirin are working. Evaluate the role of each of these sectors in the Indian economy.

Question 26. Locate and label the place in the given outline political map of India: (1)

The place where the Indian National Congress held its session in December 1920.

Question 27. Locate and label the place in the given outline political map of India:  (1)

Question 28. Locate and label the following features on the given outline political map of India:  (3)

and write their names:

To download the complete CBSE Sample Paper for Class 10 Mathematics Exam 2018 and its marking scheme, go to the following links: