All the important questions and answers for chapter Haloalkanes and Haloarenes are mentioned below. The students appearing for the CBSE Class 12th Chemistry Examination 2020 are advised to go through the article thoroughly.

In this article, we have mentioned important questions from chapter  Haloalkanes and Haloarenes. The students appearing for CBSE Class 12th Chemistry Examination 2020 can go through the below-mentioned list of important questions and answers to prepare for the upcoming chemistry examination.

Answer: (i) It undergoes SN2 reaction faster as it is a primary halide.

(ii) Due to its large size, Iodine is a better leaving group, therefore, in the presence of an incoming nucleophile, it will be released at a faster rate.

Answer: i) Tertiary halide reacts faster than secondary halide because of the greater stability of tert-carbocation.

(ii) Because of the greater stability of secondary carbocation than primary.

Question 3- How can the following conversions be carried out?

Question 4- Although chlorine is an electron-withdrawing group, yet it is ortho-, para- directing in electrophilic aromatic substitution reactions. Why? 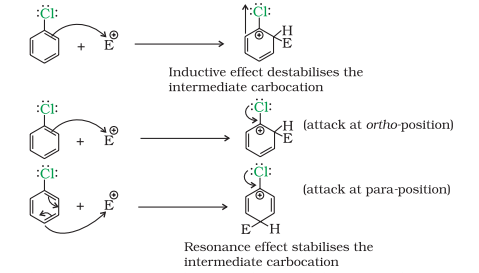 (i) p-dichlorobenzene has a higher melting point than its o- and m-isomers.

(iii) The C–Cl bond length in chlorobenzene is shorter than that in CH3–Cl.

(v) Alkyl halides, though polar, are immiscible with water.

Answer: (i) p-isomers are comparatively more symmetrical, fits closely in the crystal lattice. Therefore, they require more heat to break the strong forces of attraction. As a result, p-isomers have a higher melting point than o- and m-isomers.

(ii)  In a racemic mix, one type of rotation is cancelled by another. Therefore, (±)-Butan-2-ol is optically inactive.

(iv) Chloroform is stored in closed dark brown bottles because chloroform gets slowly oxidised by air in the presence of light and forms an extremely poisonous gas (carbonyl chloride), popularly known as phosgene.

Question 6-  Identify chiral and achiral molecules in each of the following pair of compounds:

Answer: (i) Groups like cyanides and nitrites possess two nucleophilic centres and are called ambident nucleophiles. Cyanide group is a hybrid of two contributing structures and can act as a nucleophile in two different ways [VC≡N ↔ :C=NV], i.e., linking through carbon atoms resulting in alkyl cyanides and through nitrogen atoms leading to isocyanides. 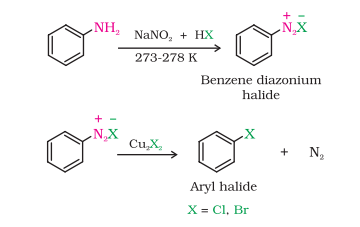 Question 8- Write the structures for the following:

(i) Grignard’s reagents should be prepared under anhydrous conditions.

Answer: (i) Grignard’s reagents react with alcohol, water, amines etc. to form the corresponding hydrocarbon and thus, must be prepared under anhydrous conditions.

(ii) n-Butyl bromide has a higher boiling point than f-butyl bromide as it has a larger surface area. Therefore,  it has more Van der Waals’ forces.

Question 10- What happens when:

(i) Chlorobenzene is treated with Cl2/FeCl3

The above-mentioned questions are strictly based on the latest syllabus prescribed by the CBSE Board for Chemistry subject. The students can go through the links for the important questions of chemistry mentioned below: