CBSE Class 12 History Sample Paper (along with Marking Scheme & Hints) for CBSE board exam 2018 is available here. With this article, students can download the paper in PDF format. This Sample Paper is very important for understanding latest examination pattern.

CBSE Sample Paper for 12th History board exam 2018 is available here. Students can download the complete CBSE Class 12th History Sample Paper (with Hints and Marking Scheme) with the help of download link given at the end of this article. This Sample Paper is recently released by CBSE.

Complete CBSE Class 12 History Sample Paper 2018 is given below:

(1) Answer all the questions. Some questions have choice. Marks are indicated against each question.

Students should attempt only 5 questions in this section.

(4) Question 10 (for 4 marks) is a value based question and compulsory question.

(6) Questions 14 -16 are sources based questions and have no internal choice.

Attach the map with the answer sheet.

Question1. Examine the notions of kingship mentioned in the Gandatindu Jataka. (2)

Question2. State how historians of religion have classified Bhakti tradition. (2)

Question3. ‘The towns built by the Mughals were famous for their imperial grandeur and wealth.’

Support it with two features. (2)

Question4. To what extent had the Harappa people established trade relations beyond the subcontinent? Explain (4)

Question7. Describe the condition of agrarian women in the Mughal rural society. (4)

Question8. ‘A cherry that will drop into our mouth one day” in the context of this statement mention Dalhousie’s policy of Awadh annexation. (4)

Question9. Why did Mahatma Gandhi think Hindustani should be the national language? (4)

A. How was the spirit of secularism drawn from the acts of Gandhi ji during partition? Cite any one example.

B. How is the value of secularism relevant to resolve communal problems in contemporary India?

Answer all the questions given below:

‘Jainism has left its mark on the Indian thinking as a whole’. Support it with the messages of Mahavira. (8)

‘The Buddha’s teachings have been reconstructed from stories’. Explain the teachings with the incidents changed the life of the Buddha. (8)

Analyze why the Sulh-i-kul policy of Akbar was considered as the cornerstone of enlightened rule? How chronicles were produced during Mughal era? Explain. (8)

Analyze the importance and limitations of Ain –i-Akbari as a source of Akbars reign. (8)

Explain the significance of Non Cooperation Movement of 1920. (8)

Explain the factors responsible for the partition of India during 1947. (8)

The Mahabharata describes how, when war between the Kauravas and the Pandavas became almost inevitable, Gandhari made one last appeal to her eldest son Duryodhana:

By making peace you honour your father and me, as well as your well-wishers … it is the wise man in control of his senses who guards his kingdom. Greed and anger drag a man away from his profits; by defeating these two enemies a king conquers the earth …

You will happily along with the wise and heroic Pandavas … There is no good in a war, no law (dharma) and profit (artha), let alone happiness; nor is there (necessarily) victory in the end – don’t set your mind on war … Duryodhana did not listen to this advice and fought and lost the war.

(i) How does a king conquer the earth as describes in the extract? (2)

(ii) Mention the views of Gandhari on feud war. (3)

(iii) Explain about Gandhari’s appeal to her son? (2)

Read the excerpt and answer the following questions

This is Al-Biruni’s account of the system of varnas:

(i) Give an account of the system of varnas described by Albiruni. (3)

(ii) Describe why did he call it as social pollution?’ (2)

(iii) Was this system contrary to the law of nature? (2)

On clearance and settled cultivation

Passing through one village in the lower Rajmahal hills, Buchanan wrote:

The view of the country is exceedingly fine, the cultivation, especially the narrow valleys of rice winding in all directions, the cleared lands with scattered trees, and the rocky hills are in perfection; all that is wanted is some appearance of progress in the area and a vastly extended and improved cultivation, of which the country is highly susceptible.

Plantations of Asan and Palas, for Tessar (Tassar silk worms) and Lac, should occupy the place of woods to as great an extent as the demand will admit; the remainder might be all cleared, and the greater part cultivated, while what is not fit for the purpose, might rear Plamira (palmyra) and Mowa (mahua).

(i) Mention about Buchanan’s opinion of how the land of Rajmahal more productive. (3)

(ii) How were Buchanan’s vision and priorities on development different from the local inhabitants? (2)

(iii) Explain how the inhabitants of the Rajmahal hill felt about the Buchanan’s ideas of production. (2)

17.1: On the given political outline map of India, locate and label the following with appropriate symbols:

(a) Rakhigarhi, the mature Harappa site

17.2: On the same outline map of India, three places related to The Indian National Movement have been marked as A, B and C. Identify them and write their correct names on the lines drawn near them. 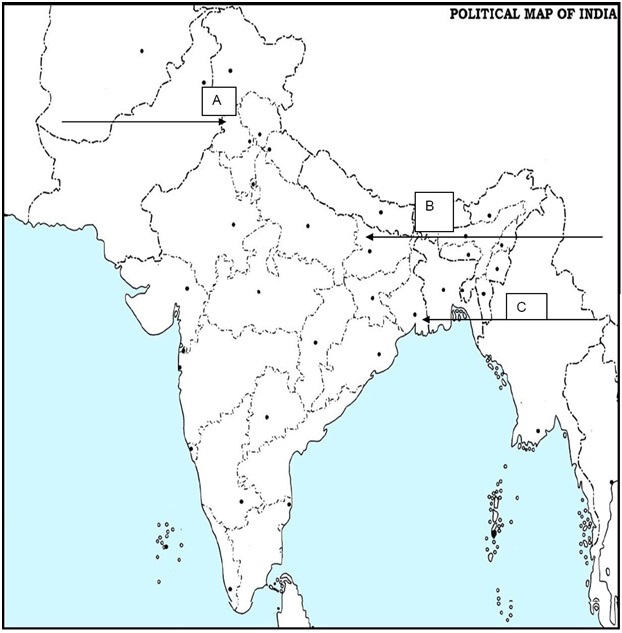