These quick notes are prepared as per the latest CBSE syllabus of Class 12th Chemistry.

The carboxyl carbon is sp2 hybridised and is trigonal planar in shape just like aldehydes and ketones. All bonds to the carboxyl carbon lie in one plane and are separated by about 120°. The carboxylic carbon is less positive than carbonyl carbon because of the possible resonance structure shown below:

•    IUPAC names of carboxylic acids have been derived from the corresponding alkanes by replacing the letter ‘e’ of the parent hydrocarbon by ‘oic’ and adding suffix 'acid' at the end.
For example:

(a) By oxidation of primary alcohols and aldehydes:

(b) By hydrolysis of nitriles: 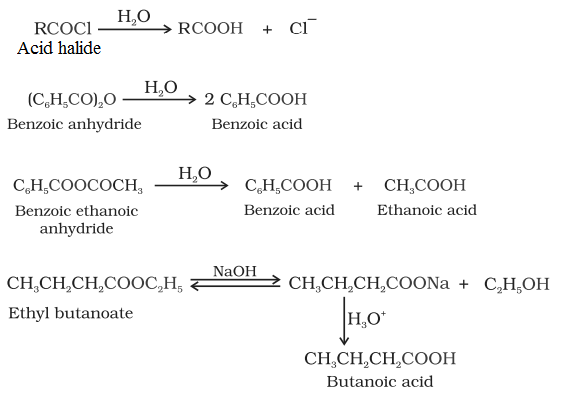 •    Aliphatic carboxylic acids up to nine carbon atoms are colourless liquids at room temperature with unpleasant odours. The higher acids are wax-like solids.

•    Carboxyl carbon is less positive due to resonance. Hence, the carboxylic acid group does not give nucleophilic substitution reactions.

•    Carboxylic acids have a higher boiling point than aldehydes, ketones or even alcohols of comparable molecular masses. This is due to an extensive network of intermolecular hydrogen bonding.

Various chemical reactions of carboxylic acids are described below:

•    Reactions with metals and alkalies:

These reactions involve the replacement of the −OH group of –COOH group by attacking electrophile.

–COOH group of aromatic carboxylic acids is a meta–directing group and is the deactivating group.

•    Ethanoic acid is used as a solvent and as vinegar in the food industry.

•    Benzoic acid and its salts are used as urinary antiseptics.