The main topics covered in this article are:

o   Predicting spontaneity of  a reaction

Notes on the chapter are as follows:

The naturally occurring substances in the form of which the metals occur in the earth’s crust are called minerals.

The mineral from which  a metal can be extracted profitably and conveniently is called an ore.

The earthy impurities like sand, rock, etc., that surround the worthy mineral in a ore, are called called gangue.

The scientific and technological process used for separating metal from its ore is known as metallurgy.

(i) Concentration of the ore

(ii) Isolation of the metal from its concentrated ore

(iii) Purification of the metal

The process of removal of unwanted materials from the ore is called concentration or benefaction of the ore.

It can be carried out by various steps as stated below:

Hydraulic washing: In this method, the lighter earthy impurities are washed away from the heavier ore particles.  Thus this method of concentration of ore is based on the difference in specific gravities of the ore and gangue particles.

Magnetic separation: This method is based on the magnetic and non-magnetic properties of the ore components.

Leaching: This method is useful in case the ore is soluble in a suitable solvent. For example, Bauxite is leached with a hot concentrated solution of NaOH which dissolves aluminium while other oxides like Fe2O3, SiO2, etc., remain undissolved

(i) Conversion to oxide.

(ii) Reduction of the oxides to metal

It can be carried out by following two methods:

Calcination: It is the process of converting an ore into its oxide by heating it in a limited supply of air or in absence of air, below its melting point. The volatile matter is burnt away and the oxide of the metal is obtained. This process is useful for metal carbonates and hydroxides. For example: CaCO3 → CaO + CO2  and  Al2O3.2H2O → Al2O3 + 2H2O.

Roasting: It is the process of converting an ore into its oxide by heating the ore in excess of oxygen (air). This process is commonly used for suiphide ores.

Reduction of metal oxides to metal

The metal present in metal oxide can be converted from cationic form to free by supplying electrons, i.e., by reduction of metal oxide. The nature of reducing agent used depends upon the activity of metal.

For example: If the metal is very reactive like Na, K, electrolytic reduction method is used whereas the less reactive metals like Cu, Sn, Fe can be reduced by chemical reducing agents like CO, H2, etc.

The process of using carbon in form of coke, charcoal, CO to reduce metal oxides to respective metals, is termed as smelting.

Because of highly inflammable nature of H2 it is used as a reducing agent especially for oxides of Tungsten (W) and Molybdenum (Mo).

Reduction of metal oxides to respective metals by using aluminium is known as alumino thermite or Gold Schmidt thermite process. It is mainly used to reduce Cr2O3 or Fe2O3

This method is used for Cu, Au, Ag, Pb, zinc, aluminium etc. The impure metal is made anode and pure metal is cathode. The following reaction takes place:

The impurities are collected at the bottom of anode and are called anode mud.

In this method a low melting metal like tin can be made to flow on a sloping surface. In this way it is separated from higher melting impurities.

In this method, we convert the metal into its volatile compound which is then decomposed to give pure metal. For the application of this method:

(ii) The volatile compound should be easily decomposable, so that the recovery is easy.

This method is based on the principle that different components of a mixture are differently adsorbed on an adsorbent. The method is suitable for such elements which are available only in minute quantities and the impurities are not very much different in their behaviour from the element to be purified.

It is used for the refining of Ni. Nickel on heating with CO form volatile Ni(CO)4  which when subjected to high temperature decomposes to give pure nickel.

Van-Arkel method: This method is also used to purify Zr and Ti

Predicting spontaneity of a reaction

The spontaneity of a reaction is decided by the Gibbs energy change ΔG, which is given as, ΔG = ΔH ‒ TΔS

Where, ΔH  is enthalpy change and ΔS is entropy change.

The graphical representation of Gibbs energy is known as Ellingham diagram. Such diagrams help us in predicting the feasibility of thermal reduction of an ore.

Example: Consider the reduction of Cr2O3 by Al.

The two equations involved in the formation of respective oxides of Cr and Al, are expressed as follows: 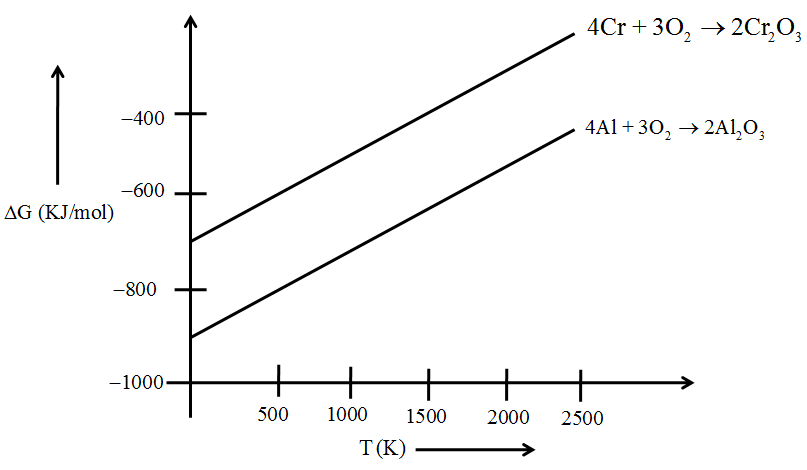 Here formation of aluminium oxide is represented by the lower line, i.e., ΔG is more negative for this reaction which means the oxide formed in this reaction is more stable. Thus Al can be used to reduce Cr2O3 to form more stable oxide, Al2O3.  Cr2O3 + 2 Al → 2 Cr + Al2O3

Extraction of ZnO to Zn

Extraction of Iron from its Oxides

The haematite ore (Fe2O3) is first calcined and then subjected to smelting. The charge consisting of calcined haematite, coke and limestone is fed into the blast furnace from its top. A blast of hot air is passed near the base of the blast furnace.

The coke undergoes combustion at the bottom of the furnace producing CO2 at about 1900 K. According to the Ellingham diagram, CO is more stable compared to CO2  to  CO only above 1000 K , thus at 1900 K , CO  is formed. It cools as it rises up the furnace and at a temperature of about 1000 K, the CO/CO2  line so that  CO is able to reduce the iron oxide to iron.

Various reactions taking place inside the furnace at 500 – 800 K range are:

Pig iron: Iron obtained from a blast furnace is called pig iron and contains about 4% carbon and other impurities such as S, P, Si and Mn.

Cast iron: It is the iron that contains about 3% carbon, extremely hard, cannot be welded and brittle.

Wrought iron: Also known as malleable iron, it is the purest form of iron. It is prepared by oxidising the impurities in cast iron in a reverberatory furnace lined with haematile.

Extraction of Copper from Cuprous oxide

Cu2O can be easily redued to Cu directly by heating with coke. But in case if Cu ores are sulphides and contain some iron, the following methods are applied:

(i) Froth flotation of the sulphide ore

(ii) Roasting of the sulphide ore

FeO can be removed by using SiO2 as flux

The solidified copper obtained has blistered appearance due to the evolution of SO2 and so it is called blister copper.