Here, you will get revision notes on CBSE Class 12 Chemistry: Chapter 5 - Surface Chemistry. These notes will give you a quick glance of the chapter.

o    Difference between adsorption and absorption

o    Adsorption of gases on solids

o    Effect of temperature on adsorption

The notes on the chpater are as follows:

Surface chemistry is a branch in chemistry which deals with the study of the phenomenon occurring at the interface of two phases. Surface represents the physical boundary of any condensed phase like liquid or solid. It separates one phase from the other.For example: Interfaces existing between two immiscible liquids like oil and water; between a metal and a gas like platinum and hydrogen; a liquid and a gas etc. The surface or interface between two phases is represented by a hyphen or slash. For example: Between the solid and the liquid, the interface is represented by solid/liquid. There is no interface between the gases as they are completely miscible with one another.

Adsorption is of two types:

Differences between Physisorption and Chemisorptions

Desorption is the reverse of adsorption which involves the removal of  the substance adsorbed from the surface. The process of desorption can be carried out by:

(i) Reducing the pressure and  (ii) By heating

Adsorption of gas on solid surface:

Almost all solids adsorb gases to some extent. Charcoal in gas mask adsorbs poisonous gases on its surface. Silica gel adsorbs moisture and is used for drying air.
The extent of adsorption of a gas on solid is expressed as x/m.
where, x = mass of the adsorbate, m = mass of the adsorbent

Factors affecting the extent of adsorption:

(i) Nature of the solid (adsorbent)

(ii) Nature of the gas (adsorbate)

(iii) Pressure of the gas

The extent of adsorption of a gas on a solid is also affected by the pressure of the gas. A graph between x/m and the pressure P at constant temperature is known as the adsorption isotherm. 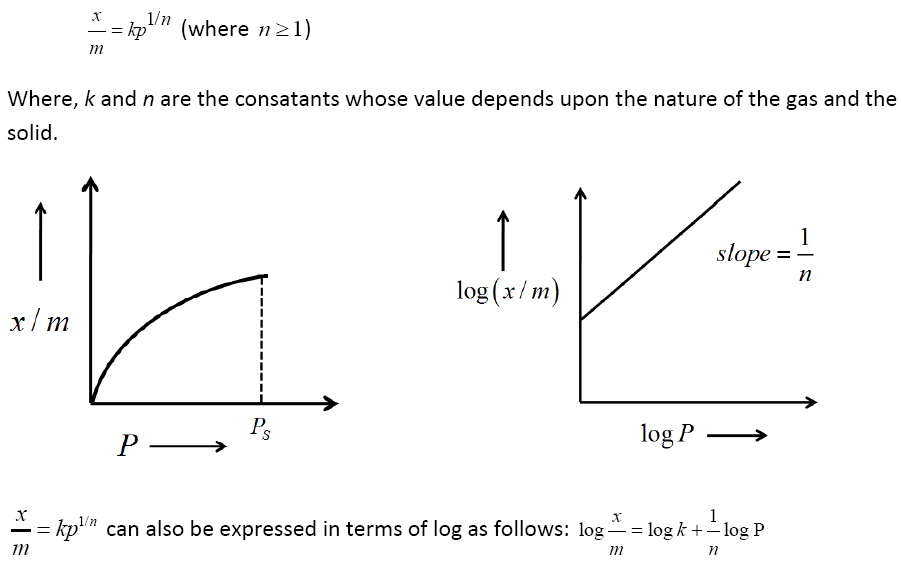 A catalyst is a substance which increases the rate of reaction without participating in the reaction. The catalyst is recovered chemically unchanged at the end of the reaction. Catalysts are always used in very small amounts and speed up the reaction by decreasing the potential energy activation barrier. A catalyst does not affect the equilibrium constant as it speeds up the reaction in both the directions whether forward or backward by the same factor.

Catalysis and its types:

The phenomenon of increase in the rate of a reaction with the help of a catalyst is known as catalysis.

It is of two types:

Important features of the catalyst:

(i) Activity: It represents the capacity of s catalyst to speed up the reaction. It depends upon the strength of chemisorption to a large extent. It also depends on the surface area of the catalyst.

(ii) Selectivity: The ability of a catalyst to direct a reaction to yield a particular product excluding others.

The shape selective catalysis depends upon the structure of the pores present in the catalyst and the size of the reactant and product molecules. Zeolites are silicates with number of cages or pores. It catalysis only those reactant molecules having a shape and size similar to cages. Example is ZSM-5 used for converting alcohol directly into gasoline. Zeolites are mainly used in petrochemical industries for cracking of hydrocarbons and isomerisation.

Enzymes are biological catalysts which are more efficient than chemical catalysts. They can speed up the reaction rates by 108 to 1020 times. Enzymes are also very specific in their action.The specific action of enzyme is due to the presence of a specific and active site present on its surface. The substrate (reactant) binds to this active site through intermolecular forces. Enzymatic reaction follows lock-and-key mechanism.