Check the CBSE Class 9 Science Notes for Chapter 4 - Structure of the Atom. Read these exclusive notes to prepare the chapter in less time though effectively.

This article presents the CBSE Class 9 Science notes on chapter 4 ‘Structure of the Atom’. These chapter notes are prepared by the subject experts and cover every important topic from the chapter. In between these notes you can try the questions asked from the discussed set of topics. These questions will help you to track your preparation level and get a hold on the subject.

Notes for Chapter - Structure of the Atom:

Fundamental particles of an atom:

Three particles; electron, proton and neutron from which an atom is consisted of, are called fundamental particles of an atom or sub atomic particles.

He carried a cathode ray experiment in which observed a stream of negatively charged particles coming out of cathode towards the anode. These particles were named as electrons. 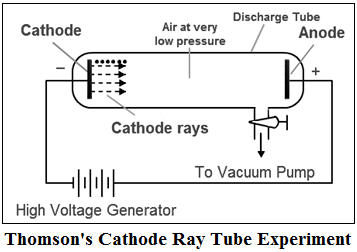 He observed in the same gas discharge tube, with different situations that the anode emitted positive particles which he named as Canal Rays. His experiment led to the discovery of proton.

Neutron is present in the nucleus of all atoms.

Thomson’s model of an atom proposed that:

→ Atom as a whole is electrically neutral because the negative and positive charges are equal in magnitude. 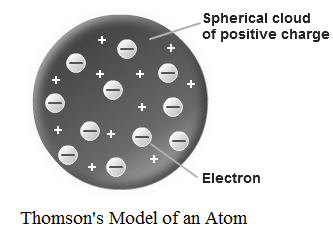 → It failed to explain how protons and electrons were arranged in atom so close to each other.

2. Rutherford’s Model of Atom (By Ernest Rutherford in 1909)

This was based on an experiment in which α – particles were bombarded on a thin gold foil. 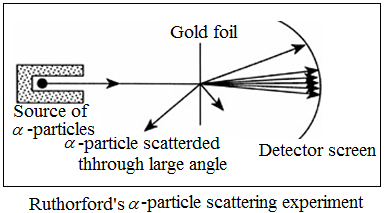 (a) Most of the α – particles passed without any hindrance.

(b) Some of the α – particles deflected from their original path at a noticeable angle.

(c) Very few of the α – particles bounced back at their original path.

Postulates of Rutherford’s Model of Atom:

(a) Most of the part in an atom is empty.

(b) There is a positively charged center in atom, which contains nearly the whole mass of atom. The centre is called nucleus.

(c) The size of nucleus is very small compared to an atom.

(d) Electrons revolve round the nucleus.

(a) According to Rutherford’s Model, electron revolves round the positively charged nucleus which is not expected to be stable. But a charged particle in an accelerated motion along a circular path would continuously undergo loss of energy and finally would fall into nucleus. This makes an atom unstable while atoms are quite stable.

(b) Rutherford model could not solve the problem of atomic mass of atom as it proposed only the existence of protons in the nucleus.

This model of atom states that:

→ An atom consists of heavy positively charged nucleus. The whole mass of the atom is concentrated in the nucleus.

→ The electrons in an atom revolve around the nucleus in definite circular paths called orbits or energy level.

→ Each energy level is associated with a definite amount of energy.

→ The change in energy takes place when electron jumps from one energy level to another energy level.

Q.1 Why is the relative mass of an electron is taken as negligible ?

Q.3 What are canal rays? What is the nature of the constituents of canal rays?

Q.4 How was Rutherford’s model of atom failed to explain the stability of an atom?

Arrangement of electrons in an atom:

The arrangement of electrons in various shells (energy levels) of an atom of the element is known as Electronic configuration.

The Maximum number of electrons that could be put in a particular shell, i.e., energy levels, was given by Bohr and Bury.
According to Bohr-Bury Scheme:

→ The maximum number of electrons in the outermost orbit will be 8 electrons even if it has capacity to accommodate more electrons.

→ Electrons, are not accommodated in a given shell. Unless earlier shells are filled, that is stepwise filling of shells is followed.

The circular path around the nucleus is called orbit, energy level or shell. Energy level are represented by English alphabets: K, L, M, N, …. and so on.

→ 1st orbit is denoted by K

→ 2nd orbit is denoted by L

Distribution of Electrons in a Orbit or Shell

The distribution of electrons in an orbit can be obtained by using formulae 2n 2 where ‘n’ is number of that orbit.

Number of electrons in K-shell i.e. in 1st orbit

Number of electrons in L-shell, i.e. in 2ndorbit

In similar way maximum number of electrons in any shell can be calculated.

The electrons present in the outer most shell of an atom are known as valence electrons. These electrons determine the valency of an atom.

Valency is the combining capacity of an atom, i.e. their tendency to react and form molecules with atoms of the same or different elements.

Valency of atoms with 8 valence electrons is zero as they have fully filled valence shell and cannot gain or lose electrons to form, molecules or compounds.

Atomic number of an element is equal to the number of protons present in the nucleus of an atom.

Since an atom is electrically neutral, thus number of protons and number of electrons are equal, therefore:

Mass Number (A)
The total number of the protons and neutrons present in the nucleus of an atom is called mass number. It is denoted by A.

The protons and neutrons together are called nucleon.

The number of neutrons present in the nucleus of an atom is rperesented by N.

Atoms of the same element having same atomic number but different mass numbers are known as Isotopes.

→ Isotope of uranium is used as a fuel in nuclear reactor

→ Isotope of cobalt is used in treatment of cancer

→ Isotope of iodine is used in treatment of goitre.

Atoms of different elements having same mass numbers are known as Isobars,

Potassium, K and Argon. Ar both have the mass numbers equal to 40.

Q 1. Helium atom has an atomic mass of 4 u and two protons in its nucleus. How many neutrons does it have?

Q 2. Number of electrons and neutrons in an atom are 3 and 4 respectively. Find its:

Q 3. Name the particles which determine the mass of an atom.

Q 5. Why does Helium has Zero valency?

Q 6. The isotopes of an atom are chemically same. Why?