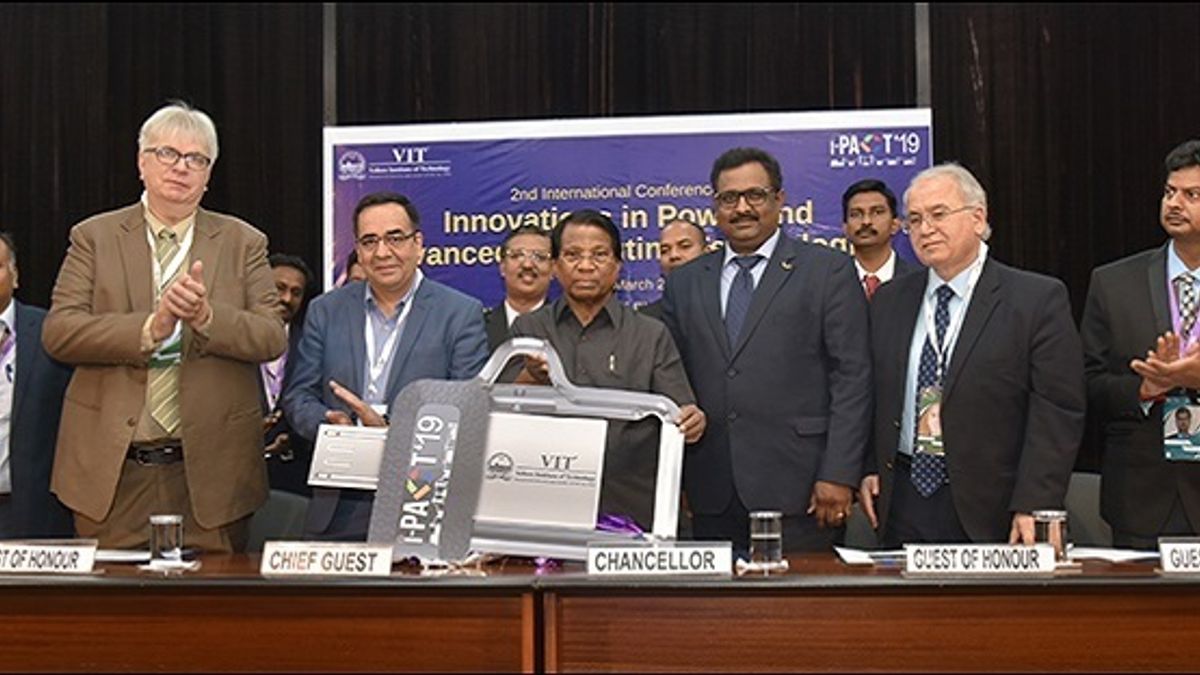 Experts should come up with means to prevent losses during power transmission: Dr.G. Viswanathan

The two-day International Conference was inaugurated by Kailash Sharma, Vice-President, GSC CS&Q, Schneider Electric, Bengaluru.  Dr.G.Viswanathan, Founder and Chancellor of VIT, dedicated a special mobile app designed for the event. The two-day International Conference is being organised by SELECT – VIT’s School of Electrical Engineering and more than 320 students, faculty, young researchers, scholars and experts from the United States, Bangladesh, Japan, Egypt, Vietnam, South Africa, Thailand, Sri Lanka, Malaysia and Singapore are taking part in the conference. More than 800 papers in the areas of Power and Advanced Computing Technologies were submitted and 400 among them were selected for presentation at the Conference, which is technically co-sponsored by IEEE-IAS in association with IEEE-NPSS-VIT and aims to create a platform for exchange of ideas among the participating delegates apart from entrepreneurs from all over the world.

In his Presidential address, Dr.G. Viswanathan said the International Conference hosted by VIT would serve as a platform for sharing about new findings in the areas of Power and Advanced Computing and also to throw light on the requirements in this area in the years to come. He pointed out that India 3rd globally in power generation, yet there were several places that witnessed power scarcity. He said that even today, 20 crore people in the country were deprived of power supply. He said that 75 % of India’s power generation came from thermal and non-conventional and renewable sources of energy. The reminded of the power supply was being sourced from Nepal and Bangladesh, Dr. Viswanathan said.

He recalled that in the year 1990, with the aim of making India a prosperous nation in the area of power supply, the National Power Grid was established and the work of distributing power supply within the States commenced. Dr. Viswanathan said it was a matter of concern that while transporting power, there was a lot of loss of power during transmission and it was as high as 22 % of the total power generation. It was the responsibility of experts to devise means to reduce this huge losses caused during transmission, Dr. Viswanathan said.

He pointed out that 90 per cent of the total power supply in the world was being consumed by just 20 countries. Developed nations should share their surplus power with those countries experiencing deficient power supply, Dr. Viswanathan added.

In his address after releasing the special teaser and inaugurating the e-proceedings of the International Conference, Mr. Sharma said that an attempt was now made to make new findings in the areas of power and advanced computing with the submission and presentation of a few hundred technical papers. He said that several changes had evolved in the world’s economy, management and industry. Educational institutions and power equipment manufacturing companies had come together to take part in research in an attempt to make new components in the area of Solar Power.

Since 2000 when the usage of computerisation expanded, 30 per cent of it has been through hardware and 70 per cent through software. Today Digital Technology had advanced like never before and applications that were made through basic technology had now become digitised.

Disclaimer: The information provided in this Notification is solely by VIT, Vellore, Jagranjosh.com bears no representations or warranties of any kind, express or implied, about the completeness, accuracy, reliability, suitability or availability with respect to the information. Individuals are therefore suggested to check the authenticity of the information.