To help Banking aspirants crack their GK section for Dena Bank PO exam, we are providing GK quiz. Take up the quiz and strengthen your preparation. 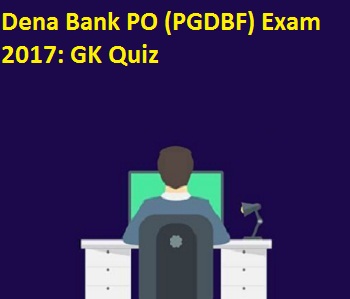 2. The Bank rate is decided by which of the following authority?

3. Who among the following is the current Human Resource Development (HRD) minister?

4. National Statistics Day is observed on

5. Which of the following is not a part of the scheduled banking structure in India?

e)      All are the part of the scheduled banking structure

6. The lending to which of the following by bank is considered as finance to priority sector?

7. Which of the following countries has became the first country which contributed $100,000 to a United Nations fund to help developing countries to actively participate in the discussion of tax issues.

8. Who among the following recently appointed is now the new president of International Economic Association?

9. Which committee was constituted to draft the final National Education Policy (NEP) document?

How to prepare for SBI PO GD/PI: A Detailed Approach