How to prepare for SBI PO GD/PI: A Detailed Approach

Group Discussion and interview is the final hurdle in the way of a candidate to become a probationary officer in the largest commercial bank of the country. After coming this far with mains and prelims success, you need to make sure that you do not fall way off in the final stage itself. 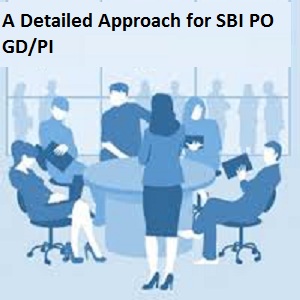 SBI, the largest commercial bank of the country, is in the process of recruiting probationary officers for its various offices across the country. The mains examination for the same was conducted on 4th June 2017 all over the country for short-listing candidates for the next and final process of screening i.e. group discussion and personal interview which is slated to start from 10th July 2017. Candidates are now anxiously waiting for their mains result and with an unexpected pattern in the mains exam, SBI is sure to give many surprises to candidates on that day. Now, in this article, we shall focus on the upcoming phase i.e. GD and PI of SBI.

The GD forum includes 12-15 candidates and they are seated around a centre table at equal distance. At the beginning of the GD, every candidate is allotted a number. After that, the panel members arrive and sit at the extreme ends of the table. Generally, they are persons who also make up the interview panel. The chairman and other members will introduce themselves and the group will be given a particular topic and some time will be given to you for jotting down your points. After that, a bell will be rung and after that, every candidate needs to speak for two minutes on that particular topic and once everyone is done, another one minute is given to each and every candidate to say something more on that topic and after everyone is done, the discussion is put to an end by the panel. The personal interview takes place after that, generally, in the next session.

How to prepare successfully for the final hurdle GD/PI

Group Discussion and Personal Interview is the last stage of recruitment to land that dream job of being an officer in the largest commercial bank of the country. It is imperative for you that you understand the requirement of SBI at this stage and prepare accordingly.

Hence, prepare with your best abilities and do not let negative thoughts like mains marks, your chances of making it to the final list based on that etc enter your mind during this journey.

All the best for your mains result which will come anytime now and after that, for the all crucial GD/PI round as well.