According to the economic survey 2017, the twin balance sheet problem has consequently continued to fester in India as the NPAs keep growing, while credit and investment keep falling. Hence, we provide Economic Survey 2017 questions on twin balance sheet for IAS Prelims 2017. 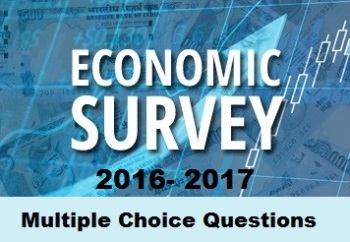 Last year financial markets in India were rocked by bad news from the banking system. One by one, public sector banks revealed their financial results and banks reported that nonperforming assets had soared, to such an extent that provisioning had overwhelmed operating earnings. As a result, net income had plunged deeply into the red.

As the data filtered into the public consciousness, it became clear that India was suffering from a “twin balance sheet problem”, where both the banking and corporate sectors were under stress. Not just a small amount of stress, but one of the highest degrees of stress in the world.

Here, we provide exclusive questions on twin balance sheet problem from the Economic Survey 2017 which can prove to be extremely helpful in IAS Prelims 2017 preparation.

1. According to the economic survey 2017, nonperforming loans have reached high levels. Consider the following data regarding bad loans and stressed assets:

2) In India, total stressed assets would amount to about 16.6 percent of banking system loans – and nearly 20 percent of loans at the state banks.

In India, banks decided to give stressed enterprises more time by postponing loan repayments, restructuring by 2014-15 no less than 6.4 percent of their loans outstanding. They also extended fresh funding to the stressed firms to tide them over until demand recovered. As a result, total stressed assets have far exceeded the headline figure of NPAs. To that amount, one needs to add the restructured loans, as well as the loans owed by IC1 companies that have not even been recognised as problem debts, the ones that have been “ever greened”, where banks lend firms the money needed to pay their interest obligations.

Market analysts estimate that the unrecognised debts are around 4 percent of gross loans and perhaps 5 percent of public sector banks. In that case, total stressed assets would amount to about 16.6 percent of banking system loans and nearly 20 percent of loans of the state banks.

2. Consider the following statements regarding the poor investment in India:

A) Private investment, which had been soaring at the height of the boom, slowed sharply and in 2016-17 so far it seems to have contracted by more than 7 percent.
R) Public investment has been stepped up considerably to arrest a fall in overall investment.

One of the major reasons why the Indian economy may not be able to grow out of its debts is that the problem itself is beginning to take a toll on growth. As countries with TBS problems tend to have low investment, as stressed companies reduce their new investments to conserve cash flow, while stressed banks are unable to assume new lending risks. And this seems to be happening in India, as well. Let’s analyse the figure below: 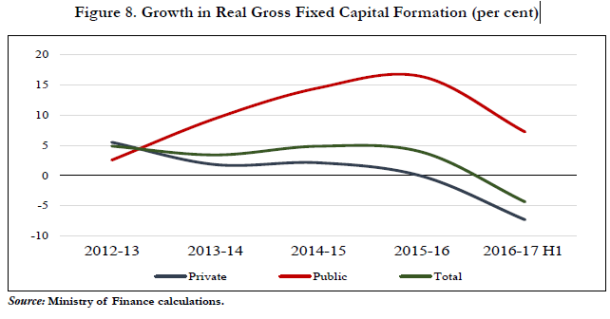 Private investment, which had been soaring at the height of the boom, slowed sharply to a 5 percent growth rate by 2010-11. By 2015-16, it had actually started to shrink, and in 2016-17 so far it seems to have contracted by more than 7 percent. To cushion the impact on the overall economy, public investment has been stepped up considerably, but this has still not been sufficient to arrest a fall in overall investment.

3.  According to the Economic survey 2017, stressed companies are consequently facing an increasingly difficult situation. Consider the following statements in this regard:

The aggregate cash flow in the stressed companies (which even in 2014 wasn’t sufficient to service their debts) has fallen by roughly 40 percent in less than two years.  These companies have consequently had to borrow considerable amounts in order to continue their operations. Debts of the top 10 stressed corporate groups, in particular, have increased at an extraordinarily rapid rate, essentially tripling in the last six years. As this has occurred, their interest obligations have climbed rapidly.

Stressed companies are consequently facing an increasingly difficult situation. Their cash flows are deteriorating even as their interest obligations are mounting and if they borrow more, this will only cause the gap to widen further.

4. Consider the following statements regarding the impact of twin balance sheet problem on different sector companies:

1) The situation in the power sector illustrates that plant load factors are exceptionally low and the tariffs are high.
2) Stress has also expanded to the telecom sector, where interest coverage ratios have deteriorated as new entry has increased competition
3) Stress on the corporate sector is not only deepening but also widening to other sectors.

The situation in the power sector illustrates the more general problem. The setbacks discussed in the second section have led to cost overruns at the new private power plants of more than 50 percent. To cover these costs, these companies need to sell all the power they are capable of producing at high tariff rates.

Plant load factors (PLF, actual electricity production as a share of capacity) are exceptionally low, meanwhile, merchant tariffs for electricity purchased in the spot market have slid to around Rs 2.5/kwh, far below the breakeven rate.

Starting in the second half of 2016, however, a significant proportion of the increases in NPAs four-fifths of the slippages during the second quarter came from mid-size and MSMEs, as smaller companies that had been suffering from poor sales and profitability for a number of years struggled to remain current on their debts. This trend is likely to continue into 2017.

Stress has also expanded to the telecom sector, where interest coverage ratios have deteriorated as new entry has round of price-cutting. In short, stress on the corporate sector is not only deepening; it is also widening.

5. According to the Economic survey 2017, TBS is taking a heavy toll on the health of the public sector banks. Consider the following facts in this regard:

1) In Public sector stressed banks, most of their outstanding loans are classified as restructured or NPAs.
2) But the Indian public sector banks are much above the international norm of the ROA (return on assets).
3) Public sector bank share prices have fallen to just two-thirds of their book value.

TBS is taking a heavy toll on the health of the public sector banks. At least 13 of these banks accounting for approximately 40 percent of total loans are severely stressed, with over 20 percent of their outstanding loans classified as restructured or NPAs. With such a large fraction of their portfolios impaired, it has become extremely difficult for them to earn enough income on their assets to cover their running and deposit costs.

Banks around the world typically strive for a return of assets (ROA) of 1.5 percent or above. But Indian public sector banks are much below this international norm. In fact, their ROA has turned negative over the past two years. And as a result, investors are no longer willing to pay “full price” for public sector bank shares: share prices have fallen to just two-thirds of their book value.