IAS Preparation is incomplete without analysing the budgetary estimates for the next fiscal year. The Union Budget 2017 is committed to working towards a transforming, energised and clean India. Hence, we provide Union Budget 2017 questions for IAS Prelims 2017. 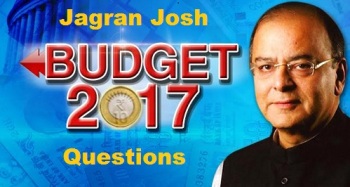 In IAS Exam, the Union Budget every year holds special importance as most of the questions in the economy section of the exam are derived or inspired from the Budget objectives. In IAS Prelims, usually, 2 to 3 objective questions are directly asked on the data analysis made in the Union Budget.

The Union Budget 2017 was broadly focused on 10 broad themes such as farmers, rural population, youth, poor, health care for the underprivileged, infrastructure, and financial sector for stronger institutions, speedy accountability, public services, prudent fiscal management and the tax administration for the honest.

The Union Budget of India is a comprehensive display of the Government's estimated revenue and expenditure for a particular year. It also includes estimates for the next fiscal year, known as budgeted estimates.

The Department of Economic Affairs under the Union Ministry of Finance is tasked with the preparation of the budget. An IAS Aspirant should be able to analyse the social-economic welfare schemes projected in the budget and prepare questions for them separately.

Hence, here we provide exclusive questions on Union Budget 2017 which can prove to be extremely helpful in IAS Prelims 2017 preparation.

Which of the following statement best describes the Agenda of Union Budget 2017?

a. Transform, Energise and Clean India.
b. 'Transform India' to have a significant impact on the economy and the lives of people.
c. Growth and Sustainable development in India.
d. None of the above.

The Union Finance Minister presented the Union Budget on February 1, 2017. A slew of changes is seen in this year’s Budget. The Main Agenda for Union Budget 2017-18 is “Transform, Energise and Clean India” or TEC India

The TEC India seeks to transform the quality of governance and quality of life of our people, energise various sections of society, especially the youth and the vulnerable, and enable them to unleash their true potential; and clean the country from the evils of corruption, black money and non-transparent political funding.

SWAYAM is a programme initiated by Government of India and designed to achieve the three cardinal principles of Education Policy that are access, equity and quality. The objective of this effort is to take the best teaching learning resources to all, including the most disadvantaged.

SWAYAM seeks to bridge the digital divide for students who have hitherto remained untouched by the digital revolution and have not been able to join the mainstream of the knowledge economy.

The Union Budget 2017 commits that a programme of “human resource reforms for results” will be launched during 2017-18. What statement best describes the objective of this programme?

According to the Union Budget 2017, the allocation for Prime Minister's Employment Generation Program and Credit Support Schemes has been increased threefold. It also made some provisions and new announcements for empowering the rural India.

• For imparting new skills to people in rural areas, mason training will be provided to 5 lakh persons by 2022
• A programme of “human resource reforms for results” will be launched during 2017-18 for human resources development in Panchayati Raj Institutions.

After the tremendous success of the BHIM app, the Government will launch two new schemes to promote the usage of BHIM; these are:

BHIM is a biometric payment system app using Aadhar platform and is based on Unified Payment Interface (UPI) to facilitate e-payments directly through the bank. It was launched to stress the importance of technology and digital transactions.