Q1. What are the economic prospects of India-Tanzania bilateral agreements?

India and Tanzania have maintained close, friendly and cooperative relations together from several decades. They have enjoyed the same ideology on anti-racism and anti-colonialism from 1960s to 1980s which was quite desirable for South-South Cooperation. These two countries have common interest and concern at the international fora. India has established its High Commission in Dar-es-Salaam and Consulate General in Zanaibar respectively in November 1962 and October 1974. 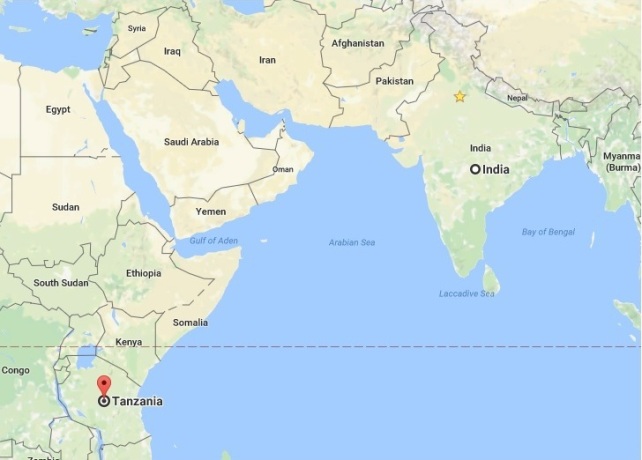 The intensity of the relationship between these two countries could be seen from the fact that the former President of Tanzania Julius Nyerere, who held in high esteem in India. He was conferred the Jawaharlal Nehru Award for International Understanding for 1974, and the International Gandhi Peace Prize for 1995.

Recent Developments between India and Tanzania

Recent bilateral ties of India and Tanzania have evolved into a modern and pragmatic relationship with greater and diversified economic engagement and development partnership. Over the decades being a trusted partner, India is offering Tanzania more capacity building training opportunities, concessional Line of Credits (LOCs) and grants for various sectoral developmental priorities.

(i) Memorandum of Understanding (MoU) for establishment of a new Vocational Training Centre at Zanzibar.

(ii) MoU on Cooperation in the field of water resource management and development and Line of Credit (LoC) of 92 million US dollars to solve the current water crisis in Zanzibar.

(iv) As a part of a new Joint Action Plan (JAP), Agreement on the collaboration of National Small Industries Corporation (NSIC) of India and Small Industries Development Organisation (SIDO) Tanzania.

Apart from these five agreements, both the countries also decided upon to:

• Cooperate in a number of areas, including food security and natural gas sector.

• Cooperate on overall defence and security partnership with special focus on maritime domain.

• Cooperate and tackle the incidence of twin global threats like terrorism and Climate Change.

• Encourage the bilateral trade and investment agreements between the industries of both the countries.

• Indo-Tanzania Trade Agreement was signed for the first time in 1966 and thereafter since 1975, India and Tanzania agreed to widen up their interaction on economic, political and cultural relations through a Joint Permanent Commission (JPC) and later through a Joint Trade Committee (JTC) as well.

• The Governments of both countries formally interact on Economic, Political and Cultural issues through the Joint Permanent Commission (JPC) and the Joint Trade Committee (JTC).

• Tanzania and India signed a Double Taxation Avoidance Agreement (DTAA) for the first time in 1979, and a recently revised version of the Agreement has been signed in May 2011.

• Since 2009, Tanzania has accessed the “Duty Free and Tariff Preference” (DFTP) Scheme offered by India to the Developing Countries for some specific commodities.

• Following the decisions of the first Indo-Africa Forum Summit of April 2008, Tanzania is eligible to access the USD 5.4 Bio. “Line of Credit” facility and USD 500 Mio. “Grant Funds” extended by India to developing African Countries over a period of 5 years since 2008. Till the year 2015, Tanzania has already accessed USD 289.56 Mio. of the “Line of Credit” funds, and is benefitting from the Grant Funds through “Capacity Building Programmes”.

• During the second Indo-Africa Forum Summit held in Addis Ababa – Ethiopia from 20 – 25th May 2011, India announced another USD 5 Billion “Line of Credit” to Africa; an additional of USD 700 Million Grant Funds to establish new Institutions and Training Programmes and another USD 300 Million for development of a new Ethiopia – Djibouti Railway Line.

• Tanzania and India remained as traditional Trading Partners for many decades in a variety of sections.

• It is gratifying to note that the Bilateral Trade Volume between India and Tanzania for the year 2010/11 has increased by about 55% compared to the previous year.

• In comparison to the year 2009/10 ranking, it is observed that during the year 2010/11 Tanzania remained at the same ranking as India’s 5th Major Export destination and improved to become the 12th (from previously the15th) Major Import Source to India from Africa.

• According to Department of Commerce data, total bilateral trade with Tanzania was US$3573.63 million during 2014-15, of which exports to Tanzania constituted US$2484.60 million and imports from Tanzania was US$1089.03 million.

• Significantly, Tanzanian exports to India which were stagnating at around $187 million annually in 2009 have jumped to over $ 1293 million in 2014 according to TRA data.

• As a part of medical tourism, many Tanzanians come to India for Medical Treatment more than to any other foreign country until such time when Tanzania develops adequate capacity of its own internal Medical Facilities.

• Tanzania is endowed with many natural and cultural resources, is home to an estimated 20 per cent of Africa’s large mammals, with 25% of the country’s area set aside for conservation purposes.

• Tanzania is also home to attractions like Mount Kilimanjaro and Mount Meru (the highest and fifth-highest peaks in Africa), the “Spice Islands” of Zanzibar, the beautiful sea beaches along the Indian Ocean Coast, Serengeti National Park (arguably the best known wildlife sanctuary in the world), Ngorongoro Crater (the largest unbroken caldera in the world) and many other attractions.

• Unfortunately, to-date the number of Indian Tourists visiting Tanzania is still very low. Only about 19,100 Indian tourists visit Tanzania annually out of the nearly 1 million Tourists coming to Tanzania every year.

• In order to tap the vast Indian Tourism Market, Tanzania is in the final stages of appointing its Honorary Consul in Mumbai in order to facilitate further promotion of Trade, Investment and Tourism activities and to ease the provision of Consular Services.

India and Tanzania’s relationship have greater correlation. If we see the economic reform period of these two countries post-cold war you will find a common analogy which reflects that these two nations have greater vision of economic cooperation and have strong desire to establish them as a greatest nation on international fora. For Indian investors, Tanzania remained as a preferred destination among the littoral nations and additionally, the political and economic stability make it better place for investments.

Despite of encouraging relationship between these two countries, there is still room for further economic cooperation and trade-offs for both the economies. India has upper hand in health care system in respect of Tanzania and Indian must share its huge pool of skilled human resources, innovative technologies models and economies of scale as a part of investment in affordable healthcare in Tanzania. Both the countries work on its capacities to establish a hurdle proof maritime trade in the Indian Ocean.