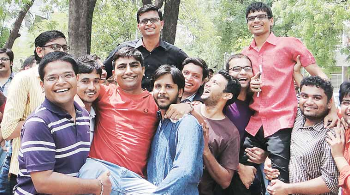 Almost all students in India at some point of their academic life have desire and aspirations to compete in the civil services examination. These aspirations are either nurtured by their parents and relatives or through inspiration from successful candidates or from their peers, generally during college time. Moreover, the majority of Indian students who choose to be an IAS aspirant for better career prospects, job security, high social recognition and to have a sense of power in contemporary times. This article narrates the story of such an aspirant, who is fortunate enough to substitute the tag of IAS aspirant by IAS Officer.

There are substantial numbers of students across India, preparing for Civil Services on their own without any help of any commercial coaching institutes. However, Majority of IAS aspirants have been knocking on the doors of any coaching institute in the vicinity of Old Rajinder Nagar or Mukherjee Nagar in Delhi. These areas have mushroomed with numerous types of coaching institutes for Civil Services Examination preparations, charging hefty fees for GS, Optional papers, Test series, essay and so on. After searching for rented accommodation through parasitic property dealers, aspirants settle down by periodically paying exorbitant rent.

Life during the IAS Preparation

Although many aspirants start preparing right from their college days, generally students start disciplined and persistent studies almost a year prior to the first Preliminary Examination, they are planning to appear. This countdown time for prelims is in fact the most crucial, the most critical and the most challenging phase on one's preparation.

The life of a student, who was having all sorts of fun during college days or during some job hitherto, comes to standstill all of a sudden. The candidate soon gets himself engaged in innumerable books and topics. He has never studied so relentlessly and so persistently. But the gestation period is quite long. People find it quite tough to carry on for longer times. The euphoria and the inquisitiveness to study variety of topics disappear gradually. The very zeal of becoming a civil servant starts petering out and gets converted in negative thoughts. It is the handling of such precarious thinking and holding the fort of one's sacrosanct dream, which makes a candidate successful.

Perks and Other Facilities for IAS Officer

During the first phase of preparation, one has to go through almost all the topics of Civil Services Examination. He wonders if there is any topic left for him to study and get acquainted with. Apart from the general studies, he has to prepare for his optional very religiously for next year's main as well. As the preliminary paper approaches, syllabi pertaining to the mains examination take back seat and aspirants start slogging for scoring as much as possible in the upcoming MCQs based examination. Cramming of current affairs, solving practice sets, evaluating previous year's question papers etc become the common norms among the serious aspirants during the last days before the preliminary examination.

Prepare for Civil Services with Job

The moment preliminary examination gets over; answer keys matching, speculation about cut off, Googling and long discussions of questions start on various forums. Within few days, the various sorts of test series start, which include GS, plethora of optional subjects and Essays. This phase consisting of four months till mains examination differentiates the serious candidates from non-serious ones, as the formers sprint, practice, cram, mug up and revise. The average hours of study further surge up.

Why All India Services is Required

The period after the mains examination makes an aspirant feel heavily relieved of some kind of burden. This is probably the phase, wherein most of the aspirants actually live their life with ease and relief. However, tension starts growing as the speculation of result declaration date approaches. This penultimate result matters a lot as the chance to finally become successful becomes closest to 2.5:1. Similar to the last result of the preliminary examination, this result also comes up with a lot of emotions.

Unsuccessful candidates feel the real pain to start it all over from the scratch, at the same time the candidates called for Personality Test start observing their Detailed Application Forms (DAF), update the recent current affair and attend series of mock interviews. This is the last leg of preparation, whose result can perhaps be the sweetest in whole life. Finally the 'D' day arrives, whose dream every IAS aspirant envisions. Candidates appear for their Personality Test with little enthusiasm, little nervousness, little eagerness and little happiness.

Within a week of the completion of all of the interviews processes, the result of the biggest competitive examination is published as breaking news in all the news sources. The hard effort, perseverance, dedication and sacrifice transforms an IAS aspirant from IAS officer.

Feeling of getting Selected, Press and Media behind you,

An ordinary aspirant has suddenly become a celebrity overnight. His phone doesn’t stop ringing, all 'Tom', 'Dick' and 'Harry' contact the successful candidate to congratulate on this thunderous success. Everyone assert their faith in you and remind you of their prediction in your childhood about similar successes. Suddenly, the successful candidate starts getting dozens of friend requests on daily basis, his photos are being circulated, journalist keep calling for his special edition interview and coaching institutes approach the person for their own publicity. 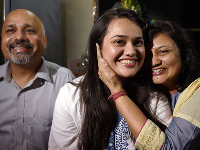 Parents of this new successful officer are probably the happiest people on this planet. They had seen this dream long ago and their tears are unstoppable. They are really proud of their ward. School teachers, college teachers, tuition teachers all shower their blessings and best wishes. This new and highly successful man soon start addressing various school and college crowds, in the workshop of commercial coaching institutes and even through blogs and 'webinars'. This pampering all over goes on throughout the 'honeymoon period' till the joining of foundation course at Mussoorie.

Life after becoming an IAS Officer

The long cherished dream has finally been accomplished with arrival at Lal Bahadur Shastri National Academy of Administration (LSBNAA), Mussoorie. The 100 day Foundation course starts somewhere in August or September. However, this training phase comprises a lot of disciplined and routine training. The day starts with very early morning PT, almost disliked by everyone and the class starts sharp at 9:00 AM and goes on till 5 PM with 1 hour lunch break and 1/2 hour tea break. The Officer Trainees (OTs) are typically taught law, management, accounting, history, polity and economics necessary for running the administration. Most of the permanent faculty members include current IAS officers, central civil servants and expert academicians, in additon to this, some renowned and eminent personalities also visit the academy to deliver guest lectures. 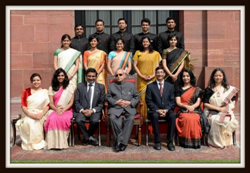 This course comprises candidates from various other services like IFS, IPS, IRS, IRTS and so on. The Foundation course goes on creating a lot of pleasant memories which are cherished for a long time to come in the future amidst regular classes, trekking the terrain of LBSNAA, participating in sports and cultural evenings.

The OTs of other services shift to their respective Central Training Institutes and IAS OTs soon leave Mussoorie for three months for very renowned 'Bharat Darshan'. This is one of the most exciting phases of IAS training as they are taken across the length and breadth of the country. After returning from the Bharat Darshan, the Phase I of IAS training start at LBSNAA, Mussoorie, which lasts for around 26 weeks. In Phase I, OTs  are trained to be Administrative Officers for which they are taught every aspect of  the job and also offered an extracurricular activity to choose from tons of choices like horse riding, cooking, unarmed combat, cricket, tennis, swimming etc. This appears to be most arduous and monotonous among all the phases of training. During this phase only, the OTs from various other services participate in 'Sangam' i.e. inter-services meet in which they compete in sports, cultural, debates, management games and so on. They then proceed to meet the President of India after completion of Phase I.

From Delhi, all OTs depart to their respective cadres, where they get practical training in any of the district of that particular state in the land and land revenue department, agriculture, co-operative, panchayats, judiciary, the police department and the divisional level of the state government. Then they get back to LBSNAA, where they share various problems associated with particular district and initiate discussions on how to ameliorate the conditions. Phase II has basically been designed to consolidate the learning and assignment of the district experiences gained over one year in the field with the technical constructs taught earlier OTs are posted as Assistant Secretaries in any ministry of the Govt. of India in Delhi after Phase II.

The objective of this posting is to provide live experience of how the Government of India functions; to the IAS officers at a very early stage in their career. On completion of their two-years' probation, IAS Probationers will be appointed as a Sub-Divisional Magistrate (SDM) (also called as Additional District Magistrate or Sub-Collector). As SDM they will look after law and order, general administration, revenue work and such developmental work as may be assigned to them.