Let us start understanding another significant concept of arithmetic chapter, ‘Averages’ which is an important part of MBA entrance. Although, you might not get direct questions from this chapter in the CAT, MAT, CMAT, XAT and other entrances, but the application of this concept holds strategic importance in enhancing your percentile.

Gain a basic understanding of formulas of ‘Averages’ to solve all the questions pertaining to this chapter.

Weighted average is calculated with the following formula:

Where, w is the number of occurrences of quantity x.

The average of all the terms in an Arithmetic Progression is called its Arithmetic Mean.

Arithmetic mean of the first ‘n’ terms in an A.P. is given by:

Geometric Mean (GM) is to be used when you work with values derived from percentage.

It is calculated as follows:

It is used when one of the values is unusually lower or higher compared to other values.

Example: The distance between two cities is divided into three parts and a man drives the three parts at speeds of 10 kmph, 40 kmph and 50 kmph respectively. What is the average speed?

Relationship between AM, GM and HM

If AM, GM and HM be the arithmetic, geometric and harmonic means between a and b, then the following results holds: 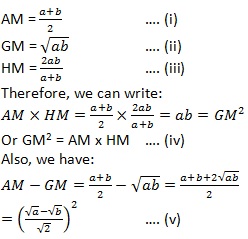 which is positive if a and b are positive; therefore, the AM of any two positive quantities is greater than their GM.

Clearly then, GM is a value that would fall between AM and HM and from equation (v) it is known that AM > GM, therefore we can conclude that GM > HM.

Median: Median of a finite set of numbers is the number in the middle position when arranged in an increasing order.

If the number of elements is even, then the median is the average of the two middle values.

Mode:  Mode is the element that occur the maximum number of times in a set.

With the help of given below formulae, we can quickly calculate averages: 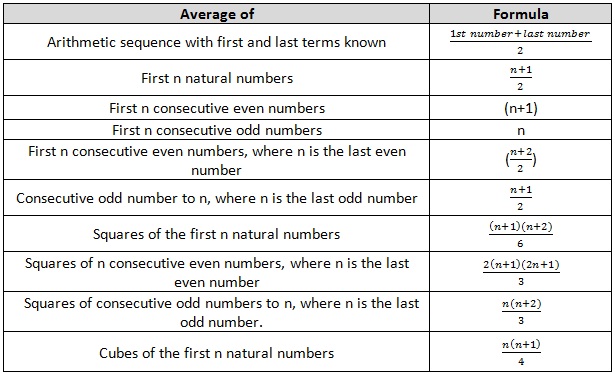 Read Also: Problems based on Averages

We hope that these concepts along with their related exercises will aid you in your preparation of Averages chapter.