The annual mega cultural event Nakshatra 14 was celebrated on 6th and 7th March 2014 in the Vels University campus at Pallavaram, with much pomp and fare. 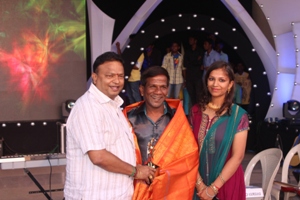 The annual mega cultural event Nakshatra 14 was celebrated on 6th and 7th March 2014 in the Vels University campus at Pallavaram, with much pomp and fare. Students from many city Universities / Colleges participated with enthusiasm in the various events on both the days.  The cultural Programmes were inaugurated by the Vice Chancellor, Vels University on 6th March. The Founder-Chancellor Dr.Ishari K Ganesh, Pro-Chancellor (Academic) and Pro-Chancellor (R&D) also participated. The first event was the short film contest. Cheran, the famous film Director was the Chief Guest for the event. The quality of short films screened was high and carried a social message. This was followed by the events tattooing, ad-zap and soap carving. Then the much anticipated event light music was held at the open auditorium ‘Velan Arangam’. Popular playback singer Gana Bala was the Chief Guest for the event. This was followed by the much awaited fashion show. The second day of the event commenced with the variety programme. The famous Mimicry artist and film actor Dhamu gave a short programme befitting the occasion, which was enjoyed by the gathering. The events Photography, Radio Jockey, adapt tune and 60secs to fame followed by the Grand Finale of all events and the most awaited “Choreo Nite”. This brought the screens down on yet another edition of Vels Nakshatra. The Participating college students left with happiness, joy and a sense of unity with an expectation of coming together once again in another blazing edition “Nakshatra ‘15”.

Disclaimer: The information provided in this Notification is solely by Vels University, Jagranjosh.com bears no representations or warranties of any kind, express or implied, about the completeness, accuracy, reliability, suitability or availability with respect to the information. Individuals are therefore suggested to check the authenticity of the information.