This year, the index has been topped by Norway again for the second year, followed by Sweden at second and the Netherlands at third. Although Nordic countries dominate the index, they too were affected by the overall decline. 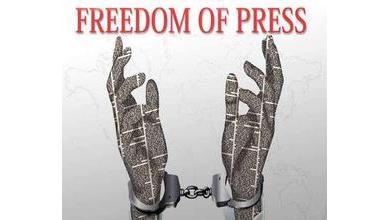 Published annually by Reporters Without Borders since 2002, the World Press Freedom Index measures the level of media freedom in 180 countries.

India’s rank dropped down to 138th this year from 136th in 2017, two points below the previous year.

India’s radical nationalists encouraged the self-censorship in the mainstream media and belittled the journalists as the targets of online hate campaigns.

• This year, the index has been topped by Norway again for the second year, followed by Sweden at second and the Netherlands at third. Although Nordic countries dominate the index, they too were affected by the overall decline.

• The report points out that more and more democratically-elected leaders no longer see media as a part of democracy, but as a rival. For instance, the US Congress narrowed the freedom of press and the freedom of speech last year, which only led to its fall in the index from rank 43 in 2017 to rank 45 this year.

• The index also reflected the growing influence of political heads and rival models. For example, Putin’s Russia extended its propaganda network by means of media outlets such as RT and Sputnik and got 148th rank, while Xi Jinping’s China (176th rank) exported its tightly controlled news and information model in Asia.

• In the Asia-Pacific region, South Korea jumped 20 places to 43rd rank, after Moon Jae-In’s election as the President.

• However, North Asia’s democracies are still struggling to defend themselves against Chinese media which is getting closer and closer to a contemporary version of totalitarianism.

• More than 50 journalists are currently detained in China; many of them are the victims of mistreatment and a lack of medical care. Liu Xiaobo, a Nobel peace laureate and the dissident blogger Yang Tongyan both died last year from cancers that were left untreated.

• China’s influence was also witnessed in Thailand, Malaysia and Singapore.

• Reporters in Pakistan (139th rank) are exposed to high level of violence, accounting for its failure to rise in the Index.

• Violence is even more worrying in Afghanistan (118th rank), where 18 journalists and media workers were killed in 2017.

• Former Soviet countries and Turkey continue to face the worldwide decline in press freedom. Almost two-thirds of the region’s countries are ranked below the rank of 150 in the index.

• The struggle of West Asian countries on war-reporting continues till today. The ongoing wars in Syria (117th rank) and Yemen (167th rank) and the terrorism charges against Egypt (161st rank), Saudi Arabia (169th rank) and Bahrain (166th rank) continue to make West Asia the most dangerous region for journalists.

• North Korea continues to rank last in the index with 180th rank. The state news agency KCNA is the only authorized source of news for all of the country’s media.

• The Index is published annually by RSF and is an important advocacy tool based on the principle of emulation between states.

• It is based on an evaluation of media freedom that measures pluralism, media independence, the quality of the legal framework and the safety of journalists in 180 countries. It also includes indicators of the level of media freedom violations in each region.

• The global indicator and the regional indicators show that there has been a deep and disturbing decline in respect for media freedom throughout the world.

• It is compiled by means of a questionnaire in 20 languages that is completed by experts all over the world.

• This qualitative analysis is combined with quantitative data on abuses and acts of violence against journalists during the period evaluated.