50% of over 9,000 vacancies in Indian Railways will be for women: Piyush Goyal

Piyush Goyal tweeted that 50% of over 9,000 vacancies that are coming up for the posts of Constables and Sub-Inspectors in the railways will be for women.

Union Railway Minister Piyush Goyal on June 28, 2019 announced that 50% of about 9,000 vacancies that are coming up for the posts of Constables and Sub-Inspectors in the Railway Protection Force (RPF) will be for women.

Sharing this information, Goyal tweeted, "50% of over 9,000 vacancies that are coming up for the posts of Constables and Sub-Inspectors in the railways will be for women." 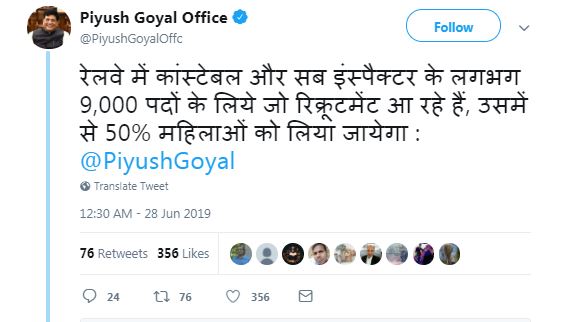 Goyal also wrote, "The work of Railway Protection Force (RPF) is to take care of railway's infrastructure, trains, stations etc. Government Railway Police (GRP) comes under the state government that looks after law and order. In the past two years, we worked successfully on the issue of women's safety and prevented small children from being misused and misguided."

At present, only 2.25 percent of women are present in the RPF. Keeping this in view, the Prime Minister suggested women recruitments. As a result, the government is going to recruit 9,000 posts in the coming time. In upcoming recruitments government’s focus will be on the recruitment of women.