Amit Dahiya was temporarily suspended on July 16, 2019. National Anti-Doping Agency has banned Amit Dahiya for deliberately misleading to the organisation. 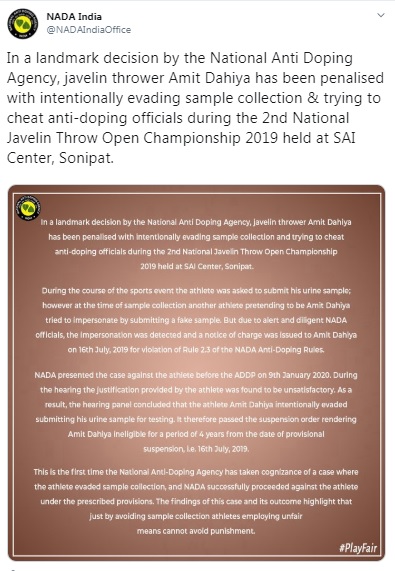 Dahiya was temporarily suspended on July 16, 2019. Nada referred his case to the ADDP (Anti Doping Disciplinary Panel) on January 9, 2020. The ADDP has decided to suspend him for four years from the date of temporary suspension.

NADA said that the National Anti-Doping Agency has banned Amit Dahiya for deliberately misleading the officials of NADA during a dope test. NADA sentenced him four years of a ban because of fraudulent attempts with anti-doping officials.

National Anti Doping Agency said in its decision that it is for the first time when NADA has taken cognizance of an issue where an athlete eluded sample collection. Now, NADA has successfully proceeded against Amit Dahiya under the prescribed provisions.

National Anti Doping Agency (NADA) was established on November 24, 2005, with a vision for dope free sports events in the country. NADA aims to implement anti-doping rules according to the World Anti-Doping Agency (WADA) rules. The organization includes veteran sports personalities, scientists and representatives from the Indian Olympic Association.