Assam Government has become the first Indian state to offer a Wage Compensation Scheme for pregnant women working in the tea gardens of the state. The path-breaking decision was taken by the state after contemplating the issues faced by women during pregnancy.

Assam Government has become the first Indian state to offer a Wage Compensation Scheme for pregnant women working in the tea gardens of the state. The scheme will be launched by Assam Chief Minister Sarbanand Sonowal on October 1, 2018 in Guwahati.

The information was shared by the state’s Health and Finance Minister Himanta Biswa Sarma last week. The path-breaking decision was taken by the state after contemplating the issues faced by women during pregnancy. 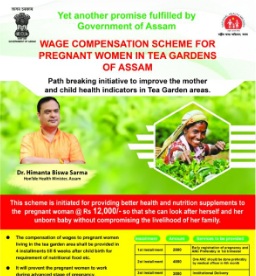 • Under the scheme, an amount of Rs 12,000 will be given to the pregnant women so that they can take care of themselves and the unborn baby without compromising the livelihood of their family.

• The women would also be given a maternity leave. They will not be engaged in work from the third trimester of pregnancy to three months after delivery.

• In addition, they will get assistance for ante-natal care and the first cycle of immunization of the child.

• The scheme is likely to benefit over 60,000 women in the state. It is expected to reduce maternal and neonatal mortality in the tea areas.

The maternal mortality rate of women working in the tea plantations of Assam is unusually high.

In the Annual Health Survey of 2012-13, Assam recorded one of the highest maternal mortality rates in India, with over 300 maternal deaths per 100,000 live births. The MMR in the state’s tea gardens was even higher, as it was recorded to be 404. The national average during 2014-16 was 130.

Further, almost 50 percent of the pregnant women aged between 15 and 49 years in the state were recorded to be anaemic, which is a leading contributor to maternal mortality.

The bulk of the workforce in Assam’s tea gardens is women.