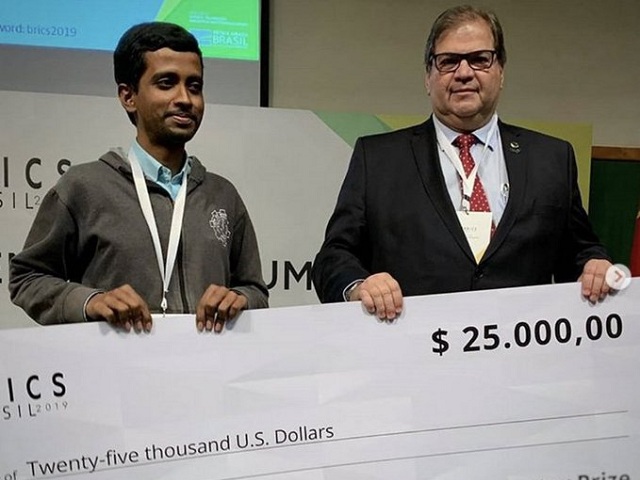 India’s Ravi Prakash was awarded the BRICS-Young Innovator Prize for inventing affordable and indigenously-designed milk chilling unit. The announcement was made by the Department of Science and Technology on social media.

Ravi Prakash won the first prize at the BRICS -Young scientist forum's conclave, which was conducted during November 6-8, 2019 in Brazil. The BRICS-Young Innovator Prize carries a cash reward worth USD 25,000.

Ravi Prakash is an Indian Ph.D. scholar of ICAR-National Dairy Research Institute (NDRI), Bangalore. Ravi Prakash was awarded the BRICS-Young Innovator Prize for coming up with an indigenous and affordable solution to storing milk while maintaining its quality and safety.

The milk chilling unit can be used by the small and marginal rural dairy farmers to cool milk from the point of production by reducing the temperature of raw milk from 37 degrees Celsius to 7 degrees Celsius within just 30  minutes using nano-fluid based phase change materials. 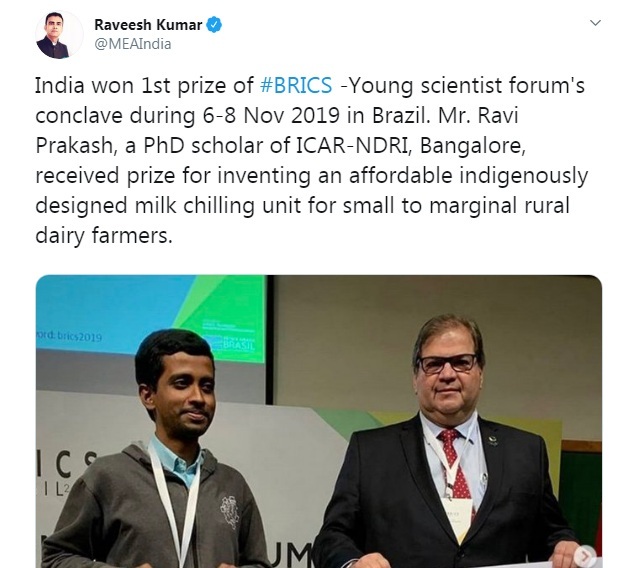 The innovation of the new indigenously-designed and affordable milk chilling unit is of great socio-economic importance for all the developing countries, as it will help preserve the quality of milk just after production. The invention would also add value to the farmer’s efforts.

What is BRICS-Young Innovator Prize?

The BRICS- Young Innovator Prize is awarded to recognize the top research, development and innovation projects that can contribute majorly to the science and technology sector of the BRICS nations.

The prize aims to recognize talented young entrepreneurs and researchers, whose outstanding innovations can impact the socio-economic conditions of life in the BRICS societies.

The young scholars, researchers and entrepreneurs chosen from varied disciplines including science, engineering and allied disciplines represent the next generation scientific and technological leadership of BRICS nations.

The BRICS Young Scientist Forum is organized in collaboration by India’s Department of Science and Technology and the International multilateral and Regional Cooperation Division.

Who is Ravi Prakash?

Ravi Prakash is an Indian scholar from West Champaran District in Bihar. His interest in addressing the rural issues of farmers arose, as he himself was born and raised in a farmer's family. He was previously awarded the Gandhian Young Technological Innovation Award by Indian President Ram Nath Kovind in 2018.

Ravi Prakash was a part of a 21-member Indian Youth delegation, which was sent to Brazil by the Department of Science and Technology to attend the 4th BRICS-Young Scientist Forum (YSF), 2019.

The BRICS-Young Scientist Forum was set up after India’s proposal to create an innovative mechanism to engage, network and connect the youth of the BRICS nations received unanimous support by the BRICS Science, Technology and Innovation Ministers at the 2nd STI Ministerial Meeting in Brasilia in March 2015.

The idea of youth engagement between the BRICS nations was mooted by Indian Prime Minister Narendra Modi during the 6th BRICS Summit at Fortaleza in July 2014.

The BRICS 2019 summit was held in Brazil’s capital city, Brasilia from November 13-14 with the theme “BRICS: Economic Growth for an Innovative Future.”