Karnataka Chief Minister BS Yeddyurappa announced his resignation from the post on May 19 barely 48 hours after he was sworn in to the post. 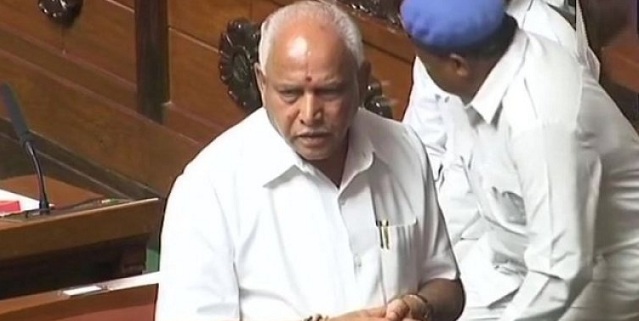 Karnataka Chief Minister BS Yeddyurappa announced his resignation from the post on May 19, 2018, barely 48 hours after he was sworn in to the post.

Yeddyurappa resigned after a long and emotional speech in the assembly that was telecasted live across the country. The move came just minutes before the Supreme Court-ordered Karnataka floor test was about to begin. Yeddyurappa, in an emotional speech, confirmed that his party does not have the required numbers. The assembly was adjourned following the surprising announcement.

Following his speech, Yeddyurappa immediately exited the assembly and went to Raj Bhawan to submit his resignation to Karnataka Governor Vajubhai Rudabhai Vala.

• The possible outcome of the move is that the governor will ask Yeddyurappa to continue till alternative arrangements are made.

• The Governor will now be looking at the next best alternative and decide on whom to call forward to form the government.

• The coalition’s CM nominee Kumaraswamy will not have to stake his claim to form the government again, as the coalition had already submitted its claim previously.

The Governor's role in Hung Assembly

Does this mean a victory for Congress- JD(S)?

The resignation of BS Yeddyurappa does not naturally translate to a Congress-JD(S) victory.

The coalition will have to prove their numbers in a floor test.

• Despite the fight in Karnataka being essentially between the Bhartiya Janta Party and the Congress, the real winner has proven to be the Janta Dal Secular.

• The party has made a huge comeback into Karnataka politics, after being out of power for almost a decade.

• Though the party’s performance was not as expected in the recent elections, the fractured mandate allowed it to align with the Congress to stake claim to form the majority government.

• A part of the arrangement is that, the President of Karnataka State JD(S) H. D. Kumaraswamy will be the Chief Ministerial candidate of the Congress- JD(S) alliance and is likely to be sworn in soon.