The CLASS instrument on Chandrayaan-2 is designed to detect direct signatures of elements present in the lunar soil.

Indian Space Research Organisation (ISRO) has announced that Chandrayaan2’s Orbiter payload CLASS has detected charged particles on the moon in its first few days of observation. CLASS has observed intensity variations in its first passage through Moon’s orbit.

ISRO said in a statement released on its official website that CLASS is able to detect direct signatures of elements present in the lunar soil. It was also found by the CLASS that best observation occurred when the Sun provides a rich source of x-rays to illuminate the lunar surface. The payload can also detect secondary x-ray emissions resulted from the lunar surface to find out elements like Na, Ca, Al, Si, Ti and Fe.

How this study took place?

• The sun emits a stream of protons and electrons into the solar system which is called the solar wind. The plasma in solar winds containing charged particles embedded in the extended magnetic field of the Sun travels at speeds of a few hundred km per second.
• These particles interact with Earth’s atmosphere and create a magnetic envelop around the earth which is called magnetosphere.
• This envelop of the magnetosphere is compressed into a region approximately three to four times the Earth radius on the side facing the Sun.
• On the other end, it has a stretched tail which is called geotail that goes beyond the orbit of the Moon.
• After every 29 days, Moon crosses the geotail for approximately six days. Therefore, Chandrayaan-2 also traversed geotail and its instruments found charged particles in the field. 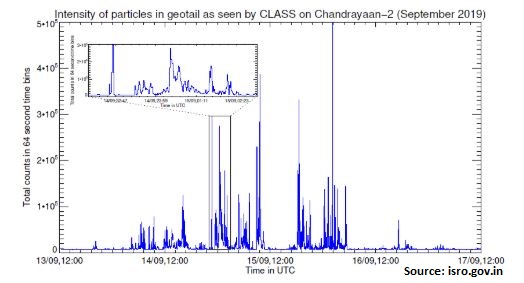 The CLASS stands for Chandrayaan-2 Large Area Soft X-ray Spectrometer. It helps to study the Moon's X-ray Fluorescence (XRF) spectra to find out the presence of major elements such as Sodium, Silicon, Magnesium, Calcium, Aluminium, Titanium and Iron. This technique will identify these elements by measuring the characteristic X-rays they emit when excited by the Sun's rays.

X-ray Monitor or XSM detects the X-rays emitted by the Sun and its corona. It calculates the strength of solar radiation in these rays and assists CLASS. Major objective of XSM is to provide solar X-ray spectrum in the energy range of 1-15 KV. This payload will give high-energy resolution and high-cadence measurements of solar X-ray spectra as input for analysis of data from CLASS.

Also Read: ISRO’s Vikram lander found unbroken but in a tilted position on the Moon