In his keynote address, Modi reiterated India’s centuries-old civilization that calls for global unity and peace and protection of the environment. He further said India’s social philosophy resonates with the theme of the 2018 WEF Annual Meeting i.e. Creating a Shared Future in a Fractured World. 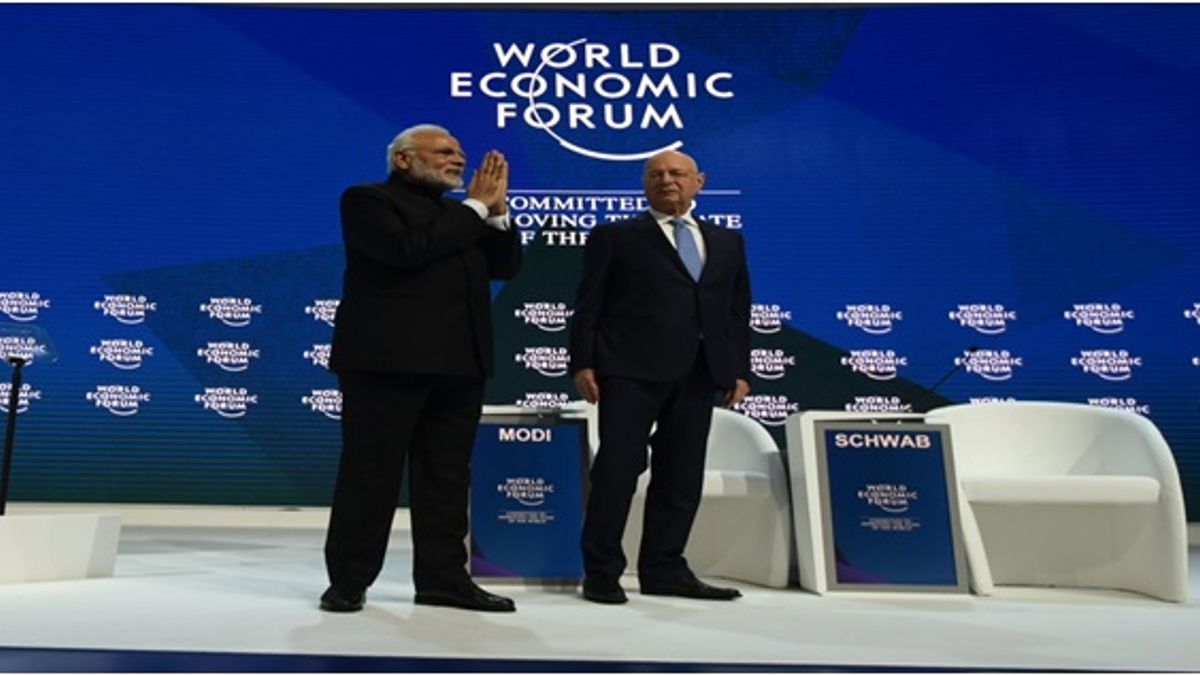 In the 4-day long Meeting, more than 2000 chief executive officers (CEOs) of top global companies, including over 100 from India, 70 heads of States and governments and 45 heads of international organizations will take participation.

• In his over 40-minute long speech, the Indian Prime Minister listed out three major challenges before the world viz., climate change, terrorism and protectionism.

• Over the last 20 years, the Indian economy has seen a major transformation. India’s GDP in 1997 was USD 400 billion. Its current GDP is more than USD 2.3 trillion.

• Modi reiterated India’s centuries-old civilization that calls for global unity and peace and protection of the environment. He further said India’s social philosophy resonates with the theme of the 2018 WEF Annual Meeting i.e. Creating a Shared Future in a Fractured World.

• Modi listed out India’s recent initiatives to transform the economy, such as, Jan Dhan Yojna, the International Solar Alliance, etc. He invited the corporate leaders to come to India to reap the benefits out of the growing economy.

The WEF and the Reliance Industries agreed to set up a Center for the Fourth Industrial Revolution (C4IR). The Centre will be set up in Mumbai and will operate as the Sister Center to the existing World Economic Forum Center for the Fourth Industrial Revolution in San Francisco, the USA. The proposed centre will allow policymakers and thought leaders in India to stay ahead of the curve through unique insights in new forms of governance and new technology applications and connections with cutting-edge technology innovators globally.

Two disciples of yoga guru Bana Ramdev, Acharya Bhardwaj and Acharya Smit, will hold classes for three-days in Davos. The classes will be attended by 70 heads of State and government, including the President of the USA Donal Trump, CEOs of top MNCs, celebrities and bankers.

The Department of Industrial Policy and Promotion (DIPP) of the Union Ministry of Commerce and Industry took special measures to promote Indian cuisine in Davos.

Bollywood actor Shahrukh Khan received the WEF’s Crystal Award for his work towards acid attack survivors. He was awarded this humanitarian award along with Sir Elton John and Cate Blanchett, for his efforts to rehabilitate acid attack survivors through his Meer Foundation.

India has been showing her growing economic prowess and the soft-power to the delegates at the WEF meeting. As a result, India is expected to benefit in the following ways.

• In his keynote address, Prime Minister Narendra Modi listed out the steps taken by the government to improve ease of doing business conditions. The positive investment climate as projected by the government is expected to result in increased foreign investment.

• India is expected to benefit from increased foreign tourist arrivals. As the land of yoga, India’s wellness tourism is expected to get a boost in the near future.

• India’s technology prowess was showcased to the global community at Davos. It is expected to result in partnerships between Indian and foreign companies in emerging technologies like Internet of Things (IoT), blockchain and big data.

Over the last ten years, the Indian economy has undergone a major transformation. The public-private partnership (PPP) model was adopted to develop economic and social infrastructure across the country. Undoubtedly, the WEF has played a key role in convincing the Indian political and corporate leadership about the relevance of the PPP model in the 21st century. With Narendra Modi’s presence at the WEF meeting, India-WEF partnership has reached the next-level.

How to read the India year book for IAS exam?