The Delhi state government has decided to implement the  Ayushman Bharat Yojana in the national capital amidst the COVID-19 outbreak. The decision was announced by deputy Delhi Chief Minister Manish Sisodia in the state assembly.

The Ayushman Bharat Yojana will provide free annual health cover up to Rs 5 lakh per family for secondary and tertiary care hospitalization.

The centrally-sponsored healthcare scheme has been referred to as the world’s largest health scheme with the beneficiaries almost equal to the population of the US, Canada and Mexico put together. 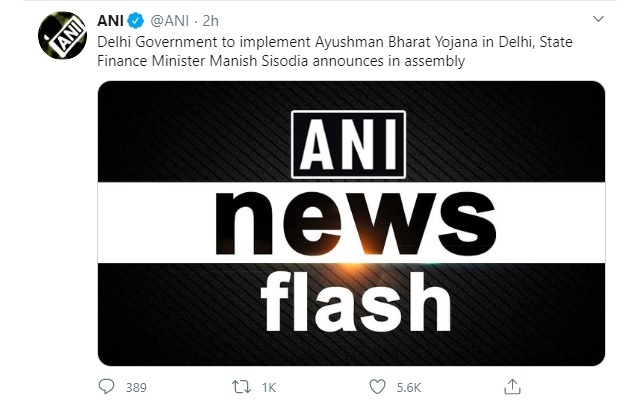 Ayushman Bharat Yojana: All you need to know!

• The scheme is also known as the 'Pradhan Mantri Jan Arogya Yojana' (PMJAY) or the  National Health Protection Mission (AB-NHPM).

• It was launched to help the poor and the economically weak families. It is expected to cover around 10.74 crore beneficiary families and about 50 crore Indian citizens.

• Under the scheme, there will be no cap on family size or age. It aims to target the vulnerable population of the nation based on the database of the Socio Economic and Caste Census of 2011.

• The benefit cover will include both pre and post-hospitalisation expenses. It will also include a define transport allowance.

• The scheme will enable the beneficiaries to take cashless benefits from the public and private empaneled hospitals.

• The scheme will receive a 60 percent fund contribution from the centre, while the remaining has to be put in by the states.

The Ayushman Bharat Yojana was launched by Prime Minister Narendra Modi on September 23, 2018. The scheme is overall expected to strengthen the healthcare services of India. Around 13000 hospitals have been contacted for the implementation of the scheme.