India opts out of RCEP agreement: Know all the reasons

India stated that the RCEP agreement failed to address some of India’s major issues.

India decided to not join the Regional Comprehensive Economic Partnership (RCEP) after it failed to address India’s key concerns. The central government’s decision was hailed by all opposition leaders in India, who were against the signing of the deal.

Prime Minister Narendra Modi made the announcement while speaking at the 2019 RCEP Summit in Bangkok on November 4, 2019. The RCEP summit saw participation from many world leaders. PM Modi, in his speech, said that India backs greater regional integration, freer trade and adherence to a rule-based international order.

PM Modi continued by saying that India has been pro-actively, constructively and meaningfully engaged in the RCEP negotiations since inception, however, during the 7 years of RCEP negotiations many things including global economic and trade scenarios have changed. The Prime Minister said that India cannot overlook these changes and added that the present RCEP Agreement doesn’t properly reflect RCEP’s basic spirit.

The Prime Minister concluded by saying that he cannot compromise the interests of the Indian farmers and workers by joining the trade deal to gain larger market access.

India, after assessing the current global situation and the fairness and the balance of the RCEP agreement, conveyed its decision to not join the partnership.

India stated that the agreement failed to address some of India’s major issues.

PM Narendra Modi highlighted that signing the RCEP agreement would have a negative impact on the lives and livelihood of all Indians, especially the weaker sections of the society.

PM Modi quoted Mahatma Gandhi’s advice on recalling the face of the weakest and poorest and then ask if the steps are of any use to them. 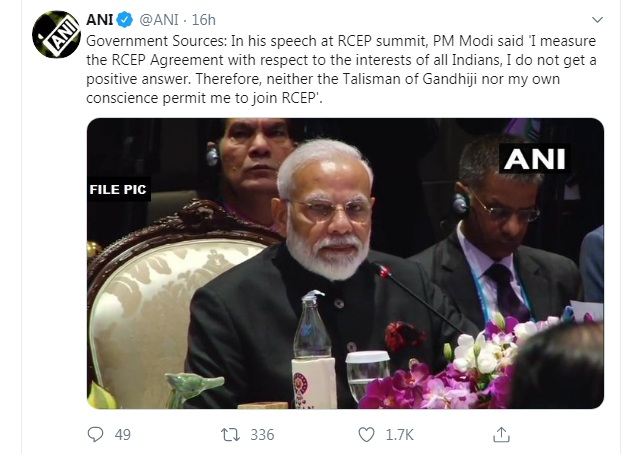 The Prime Minister stated that India had participated in the negotiations for the RCEP agreement with good faith and with a clear view of its interest.

Given the current situation, PM Modi announced that not joining the agreement will be the right decision for India, as it was against India’s economic interests and national priorities.

The Prime Minister said India stands for greater regional integration as well as for more free trade and adherence to a rule-based international order.

Why did India opt out of RCEP?

India was looking for more protection of its domestic industry and agricultural sector from the surge of imports under the deal, especially from China.  Since the deal could not offer any such specific protection, India decided to not join it to protect the national interest, protect the poor and stop unfair imports. The decision came as the opposition racked up pressure on the government to pull out of RCEP. 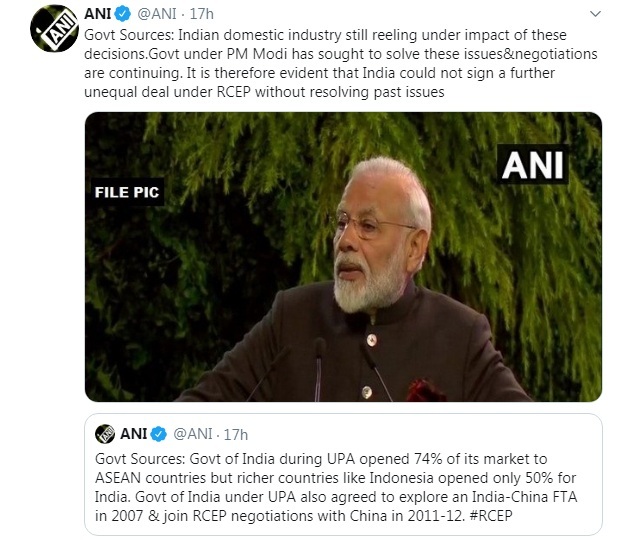 India had concerns about getting swamped by imports under the agreement, which will put the small Indian businesses and farmers at risk. According to Commerce and industry minister Piyush Goyal, the decision of not joining the RCEP agreement will provide a boost to the ‘Make in India’ initiative.