Pavan Sukhdev was honoured with the 2020 Tyler Prize for his outstanding work in the sphere of the green economy. While receiving the award, Sukhdev stated that one does not have to be an environmentalist to care about protecting the environment.

Sukhdev was the head and special adviser of UNEP’s 'Green Economy Initiative'. The initiative was a major project launched by the then UN Secretary-General Ban Ki-moon. 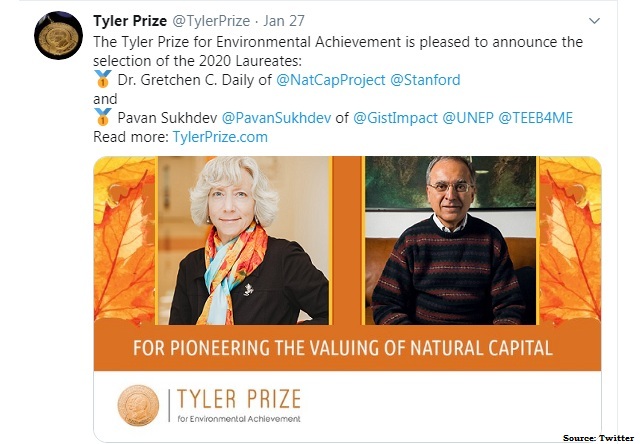 Who is Pavan Sukhdev?

• He had earlier served as a special adviser and head of UNEP’s Green Economy Initiative. He was also appointed as the study leader of a global UNEP-hosted study on ‘The Economics of Ecosystems & Biodiversity’ from 2008 to 2010.

• The first report of the study was published during the peak of the 2008 global financial crisis. The report went on to become a foundation for the global Green Economy movement.

• Sukhdev currently serves as the President and Chairman of the board of World Wildlife Fund and as a member of the TEEB Advisory Board. He also serves as a board member of the Cambridge Conservation initiative and Stockholm Resilience Centre.

What is Tyler Prize?

The Tyler prize is one of the first international premier environmental awards, often described as the ‘Nobel Prize for Environment’. It was constituted in 1973 by the late John and Alice Tyler.

The Tyler Prize 2020 recognized two remarkable individuals, who are both pioneers in illuminating and quantifying the economic value of our natural environment- Conservation Biologist Gretchen C. Daily and Environmental Economist Pavan Sukhdev.

The winners of the 2020 Tyler Prize will deliver a public presentation about their work at the New York Academy of Sciences in New York City on April 30, 2020. They will be officially honoured with the prize by the Tyler Prize Executive Committee and distinguished members of the international environmental community during a private ceremony at the Intercontinental Barclay Hotel in New York City on May 1, 2020.