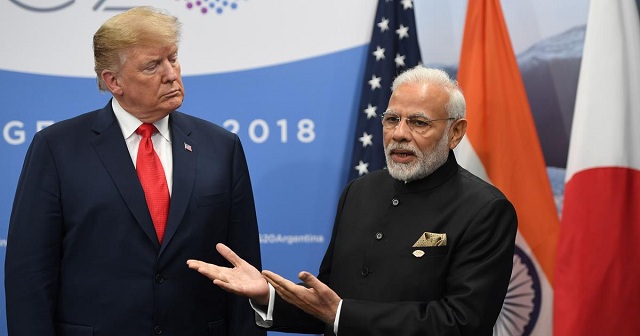 Rajnath Singh also clarified that though PM Modi had met and held discussions with US President Donald Trump there were no discussions on Kashmir. Singh backed External Affairs Minister S Jaishankar's clarification on the matter saying that no statement could be more authentic than his.

US President Donald Trump had claimed recently that PM Modi had asked for US mediation in Kashmir dispute. India has sharply rejected Trump’s controversial claim stating that India has always maintained that Kashmir is a bilateral issue. India also, according to reports, lodged a protest regarding the claim with the US State Department.

S Jaishankar, Indian External Affairs Minister while speaking on Donald Trump’s Kashmir comment in the Rajya Sabha on Tuesday had clarified saying that "I would like to categorically assure the House that no such request has been made by PM Modi." 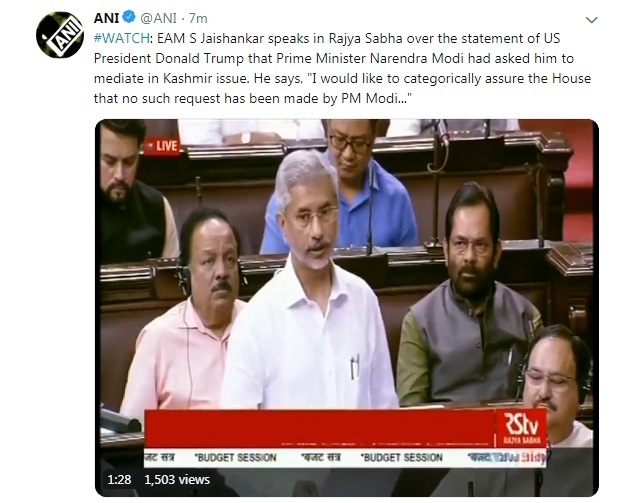 Donald Trump, while hosting Pakistan Prime Minister Imran Khan stated that PM Modi had asked him to mediate in the long-standing Kashmir dispute between India and Pakistan. Trump said that Modi asked him, “'Would you like to be a mediator or arbitrator?' I said, 'Where?' He said, 'Kashmir.' Because this has been going on for many, many years.” Trump continued by saying, “If I can help, I would love to be a mediator.”

The remark signals a sharp shift from US’s earlier stand that the Kashmir issue must be solved bilaterally. Pakistani PM Imran Khan welcomed Trump’s mediation remarks and said that if the US agrees to mediate in the Kashmir dispute, prayers of more than a billion people will be with him.

Trump's controversial claim invited a strong reaction from the Indian Ministry of External Affairs. Raveesh Kumar, the official spokesperson of External Affairs Ministry, immediately rejected US President’s claim stating, “We have seen @POTUS's remarks to the press that he is ready to mediate if requested by India & Pakistan, on Kashmir issue. No such request has been made by PM @narendramodi to US President.”

The MEA spokesperson further said that it has been India's consistent position that all outstanding issues with Pakistan are discussed only bilaterally. “Any engagement with Pakistan would require an end to cross border terrorism. The Shimla agreement and the Lahore Declaration provide the basis to resolve all issues between India and Pakistan bilaterally,” said Kumar.

India has always strictly maintained that the Kashmir dispute is a bilateral one and no third party has any role. Even when the Chinese president Xi Jinping had offered to be a mediator during his talks with Modi at the SCO summit in June, Modi firmly rejected his offer asserting that it was a bilateral matter.

Pakistan, on the other hand, has always sought US mediation in Kashmir dispute, repeatedly raising the matter on international forum.

Donald Trump on Kashmir: US clarifies Kashmir is a bilateral issue

As per sources, India took up the matter with the  White House, which prompted US administration to do damage control with the State Department clarifying that the US has always considered the Kashmir dispute to be a bilateral issue between India and Pakistan.

The official statement released by the White House on Trump’s meeting with Imran Khan also omitted the Kashmir topic. US President Donald Trump is known to make such controversial and inaccurate statements.

Though Kashmir is currently divided between India and Pakistan, it is claimed entirely by both the nations. The conflict began after the partition of India in 1947.

India stopped its bilateral talks with Pakistan after the attack on Pathankot Air Force base in January 2016 by Pakistan-based terrorists. India maintains that talks and terror cannot go together.

Yet again in February 2019, a suicide attack by Pakistan-based terrorists led to the killing of more than 40 CRPF personnel in India-administered Kashmir's Pulwama region, which prompted a second surgical strike by India after Uri, in Balakot.