The Indian Space Research Organisation has launched the communication satellite GSAT-29 aboard ISRO’s heavy-lift rocket GSLV Mark-III. The satellite will mainly aim to increase hi-speed communication facilities in the northeast and far-flung areas of the nation.

The launch took place at 05.08 hours from the second launch pad of the Satish Dhawan Space Centre at Sriharikota in Andhra Pradesh. The countdown for the launch had begun at 2.50 pm on November 13. The GSLV Mark-III rocket weighs around 640 ton and has a height of 43.4 metres.

• After injection, ISRO’s Master Control Facility at Hassan assumed the control of the 3,423 kg satellite.

• In the coming days, three orbit raising manoeuvers will be executed to position the satellite in the Geostationary Orbit at its designated location, at an estimated height of 36,000 km from the earth.

• GSAT-29 is a multiband, multi-beam communication satellite, intended to serve as test bed for several new and critical technologies. The mission life of the satellite is over ten years.

• It carries Ka/Ku-band high throughput communication transponders, which are intended to cater to the communication requirements of users, including those in remote areas.

• The satellite will mainly aim to increase hi-speed communication facilities in the northeast, Jammu & Kashmir and other far-flung areas of the nation.

• The satellite also carries few other systems such as Q/V-band communication payload, for experimenting with the evolving technologies in satellite science.

• It also carries a Geo High Resolution Camera, which will carry out high resolution imaging and an Optical Communication Payload, which will demonstrate data transmission at a very high rate through optical communication link. 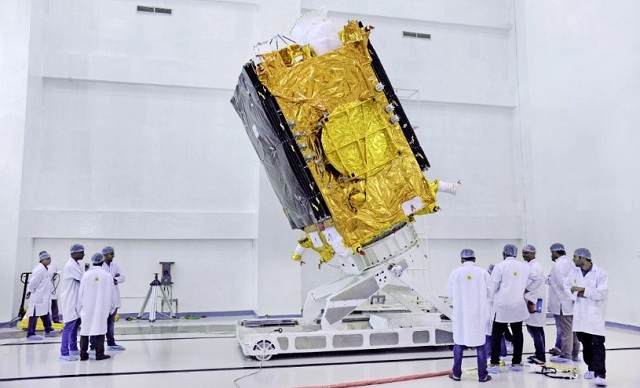 This is the second test flight of the launch vehicle. Its success will prove its reliability for future commercial launches.

The same class of rocket is scheduled to be used for the upcoming Chandrayaan-II mission in January 2019 as well as the Gaganyaan mission.

The four-ton class vehicle comprises three stages, beginning with the two solid strap-on motors on both the sides of the middle stage. The middle stage uses liquid fuel and the upper one is a cryogenic engine.