The first-ever Tri Services Joint Exercise between Indian and Russian Armed Forces, INDRA-2017 began recently near Vladivostok in Russia. The exercise, INDRA, was previously conducted as a single service exercise alternately between the two countries. This year, it was upgraded to involve all the three services Army, Navy and Air Force. 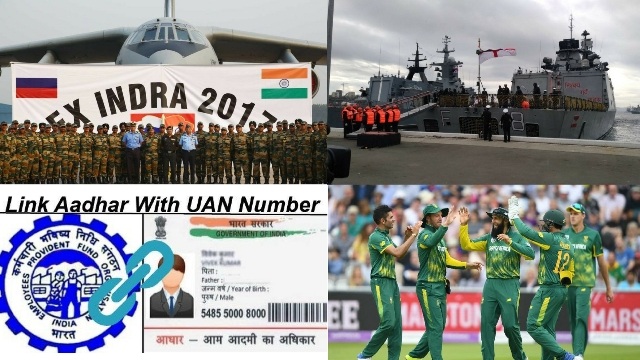 The first-ever Tri Services Joint Exercise between Indian and Russian Armed Forces, INDRA-2017 began on 19 October 2017 near Vladivostok in Russia.

Two indigenously built Indian Naval ships INS Satpura and INS Kadmatt were received with a traditional ceremonial welcome at the Vladivostok Port. The Indian contingent for the Exercise is being led by the Task Force Commander, Major General ND Prasad.

The exercise, INDRA, was previously conducted as a single service exercise alternately between the two countries. This year, it was upgraded to involve all the three services Army, Navy and Air Force.

Employees Provident Fund Organization (EPFO) has launched an online facility for its subscribers to link their Aadhaar number with their Universal Account Number.

The facility has been made available at EPFO's main online website.  It will enable members to have a better and speedy EPFO service. While using the facility, the members will be required to provide their Universal Account Number, following which an OTP would be sent to their mobile linked with UAN and then they would be required to provide their Aadhaar number. If UAN details are matched with Aadhaar, then UAN will be linked with Aadhaar.

India on 19 October 2017 lost their number one rank in ICC ODI rankings to South Africa.

According to the newly updated ODI rankings list, South Africa jumped to the top spot after their 104-run win over Bangladesh in the second ODI at Paarl. While India and South Africa both currently share the same number of points-120, India is placed second on the basis of decimal points.

India, however, have a chance to reclaim their top spot as they host New Zealand in a three-match ODI series, which is scheduled to begin in Mumbai on 22 October 2017.