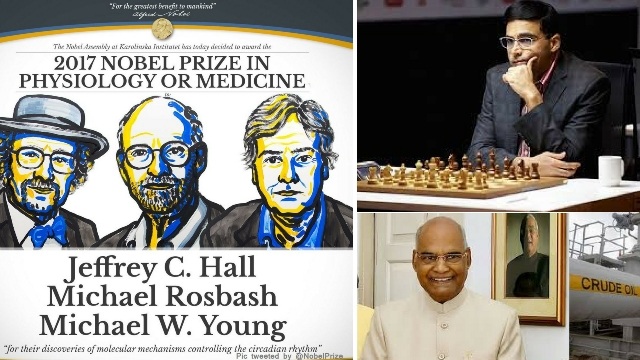 President Ram Nath Kovind has appointed a Commission to examine the sub-categorisation of the Other Backward Classes (OBCs).

India on 2 October 2017 received its first-ever shipment of US crude oil with state-owned Indian Oil Corp importing oil cargo of 1.6 million barrels at Odisha’s Paradip port.
Indian Oil will now process the crude oil at its East-Coast base refineries, located at Paradip, Haldia, Barauni and Bongaigaon.

According to an official release, Indian Oil, which became the first Indian public sector refiner to source US crude oil has placed a cumulative order 3.9 million barrel from the US. The decision to source crude from the US came soon after the visit of Prime Minister Narendra Modi to the country.

Five-time World Champion Viswanathan Anand finished second at the Isle of Man Chess Championship at Douglas. Anand defeated the Chinese grandmaster Hou Yifan in the 9th and final round. He took 53 moves to overpower Yifan to finish with 7 points.

Anand shares his second position with Nakamura Hikaru from United States of America. The Isle of Man Chess Championship was won by Magnus Carlsen, Norwegian chess grandmaster, who finished with 7.5 points after a short draw against Nakamura.

Other Indians, Vidit Santosh Gujrathi and Swapnil S Dhopade,  finished at the joint third position with 6.5 points after playing out draws against Hungarian Rapport Richard and Ukraine's Eljanov Pavel respectively.

The Nobel Medicine Prize for 2017 went to US geneticists Jeffrey C Hall, Michael Rosbash and Michael W Young for their discoveries on how plants, animals and humans adapt their biological rhythm so that it is synchronised with the Earth's revolutions. The award was announced on 2 October 2017 by the Nobel Assembly.

For many years, scientists have known that living organisms including humans have an internal clock that helps them adapt to the rotation of earth. The clock influences such biological functions as hormone levels, sleep, body temperature and metabolism.