Ministry of Railways is going to introduce a new tri-weekly Special Rajdhani between Delhi - Mumbai route. The main aim behind the move is to fulfil the long overdue demand of passengers and to provide faster and convenient connectivity to passengers between the two metro cities. 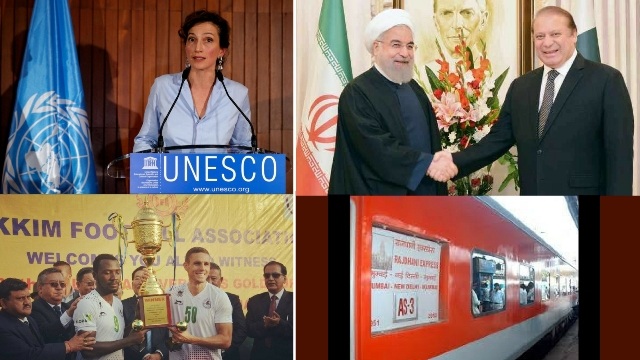 Ministry of Railways is going to introduce a new tri-weekly Special Rajdhani between Delhi - Mumbai route from 16 October 2017.

It will run from Hazrat Nizamuddin and will have stoppages at Kota, Vadodara and Surat stations. The main aim behind the move is to fulfil the long overdue demand of passengers and to provide faster and convenient connectivity to passengers between the two metro cities. The travel time will be reduced from 15 hours 50 minutes to 13 hours 55 minutes.

However, there will be no Flexi fare component in the fare structure of the train. Indian Railways are already running two Rajdhanis and more than 30 mail/exp trains between Delhi and Mumbai.

Pakistan and Iran on 15 October 2017 signed a Memorandum of Understanding (MoU) to improve border security management, agreeing to not let their territories be used for terrorism against each other.

The part was signed during the 21st two-day meeting of Pakistan-Iran Joint Border Commission in the port city of Gwadar in Balochistan province. The joint proposals pertaining to border situation, security matters, immigration and border trade between the two countries were discussed.

Pakistan shares a 900 km-long border with Iran which in the recent months has expressed concern over militants operating along the Pakistani border.

Mohun Bagan won the 37th All India Governor's Gold Cup football tournament for the 10th time by defeating Partha Chakra by a narrow 1-0 margin on 15 October 2017.

In the final match played at Paljor Stadium, at Gangtok, Mohun Bagan's striker GA Kramah scored the lone goal in the 7th minute. Chief Minister of Sikkim, Pawan Kumar Chamling attended the final and gave away trophies and cash prize to winners and the runner-up.

The Sikkim Governor's Gold Cup is the only tournament to have been held uninterruptedly for the last 31 years.

Azoulay has now been handed the responsibility of reviving UNESCO’s fortunes after the United States withdrew from the international agency, accusing it of harbouring anti-Israel bias. Azoulay edged Qatar’s Hamad bin Abdulaziz al-Kawari after the fifth round of voting and the decision will now be put forward for approval to UNESCO’s 195 members on 10 November 2017.

Azoulay would be succeeding outgoing Director-General Irina Bokova of Bulgaria, whose eight-year term was marred by financial woes and criticism over Palestine's inclusion as a member.