Prime Minister Narendra Modi has dedicated the National Salt Satyagraha Memorial at Dandi in Navsari district, Gujarat to the nation, on the occasion of Mahatma Gandhi’s 71st death anniversary. The memorial has 24-narrative murals depicting various events and stories from the historic 1930 Dandi March.

Prime Minister Narendra Modi on January 30, 2019 dedicated the National Salt Satyagraha Memorial at Dandi in Navsari district, Gujarat to the nation, on the occasion of Mahatma Gandhi’s 71st death anniversary.

The Prime Minister also unveiled at the memorial site, the statues of Mahatma Gandhi and 80 Satyagrahis who had marched with him during the historic Dandi Salt March in 1930 to make salt from sea water against the British law.

• The memorial has 24-narrative murals depicting various events and stories from the historic 1930 Dandi March.

• Besides, solar trees are installed around the site to meet the energy requirements of the memorial complex.

• The memorial aims to serve as a reminder of the great sacrifices made by the people of the nation for the cause of freedom.

• It is a tribute to the Satyagrahis led by Gandhi Ji, who worked for India’s freedom and is expected to be a major attraction for the tourists.

• The memorial encapsulates the ideals of Mahatma Gandhi-  Agrah for Swadeshi, Swatchagrah and Satyagraha. 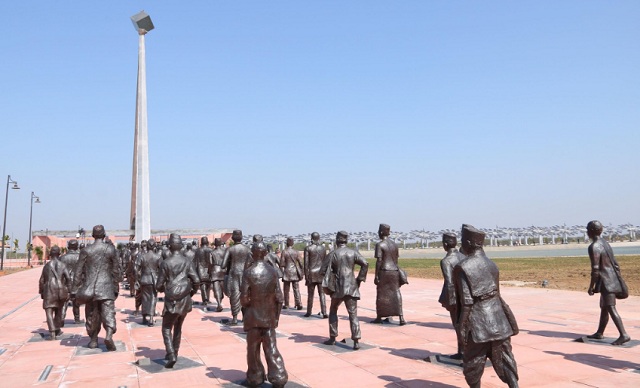 Prime Minister Narendra Modi during his visit to Gujarat also laid the foundation stone for the extension of terminal building of the Surat Airport on January 30, 2019.

The Terminal building is being constructed at a cost of Rs 354 crores with an area of over 25,500 square metres with passengers handling capacity upto 1800. It is expected to lead to enhanced connectivity and economic prosperity in Surat and surrounding areas.

He also inaugurated various other developmental projects in Surat and addressed the New India Youth Conclave.

The Prime Minister also inaugurated the state-of-the-art Venus Hospital in Surat, which is aimed at catering to the city’s healthcare needs.

The Prime Minister was on a day-long visit to Gujarat. In an effort to carry forward the legacy of Mahatma Gandhi, the Union Government has modernised around 2000 institutions related to khadi. The move has benefitted lakhs of craftsmen and workers.

The Government has, in fact, declared August 7 to be celebrated as Handlooms Day, every year to promote handlooms.