Two teachers will be selected as ''health and wellness ambassadors'' in every government school to raise awareness about preventive health aspects. 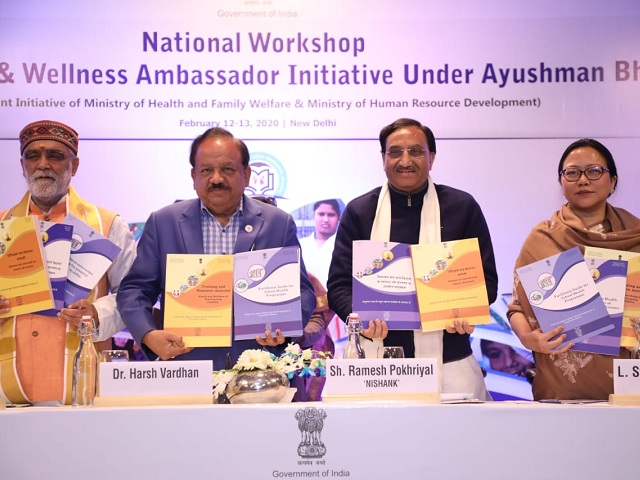 The central Government launched the School Health Ambassador Initiative on February 12, 2020 to spread awareness about the preventive health aspects. Under the initiative, two teachers will be identified in every government school as ‘health and wellness ambassadors’.

Union HRD Minister Ramesh Pokhriyal and Union Health Minister Dr.Harsh Vardhan jointly released the curriculum for the School Health Ambassador Initiative in New Delhi on February 12, 2020. The initiative has been launched as a part of Ayushman Bharat. It will be jointly run by the Union ministries of Health and Human Resources Development.

The School Health Ambassador Initiative aims to foster growth, development and educational achievements of school-going children by promoting their health and well-being. It also aims to strengthen the concept of preventive, promotive and positive health, which forms a fundamental part of the health and wellness centres of the Ayushman Bharat scheme.

The initiative will be linked with other government initiatives such as the Eat Right campaign, Fit India movement and Poshan Abhiyaan for the overall development of children’s health.

• Two teachers will be selected as ''health and wellness ambassadors'' in every government school to raise awareness about preventive health aspects. These ambassadors will receive support from class monitors, who will serve as ''Health and Wellness Messengers''.

• The health and wellness ambassadors will spread awareness regarding preventive health by organising culturally sensitive activity sessions for one hour every week for 24 weeks in a year to promote joyful learning.

• A proper 24-hour curriculum has been prepared for the health programme by the National Council of Educational Research and Training (NCERT). Besides this, materials for the training of nodal teachers and a facilitator’s guide have also been developed in consultation with the Health and HRD Ministry.

• Eleven themes have been identified under the health programme including emotional and mental wellbeing, gender equality, interpersonal relationships, nutrition, prevention and management of substance misuse, health and sanitation, reproductive health and HIV prevention, promotion of safe use of the internet, media and social media and security against violence and injuries.

• The NCERT has constituted a National Resource Group (NRG) comprising 40 members who have sound training skills and experience in adolescent health. The NRG will then train the state resource group.

• In the first phase, the programme will be launched in all government primary, secondary and senior secondary schools of aspirational districts. It would be implemented in all the remaining districts in the second year.

The School Health Programme (SHP) was launched under Ayushman Bharat by Prime Minister Narendra Modi on April 14, 2018 in Bijapur, Chhattisgarh. The programme is a joint collaboration between the Union Ministry of Health, HRD Ministry and the Department of School Education & Literacy.

The initiative is aimed at facilitating an integrated approach to health programming and more effective learning at the school level.