Eleven days after the Uri attack that claimed 18 soldiers, Indian Army carried out a four hour Surgical Strike on the night of September 28-29, 2016 in Pakistan Occupied Kashmir, inflicting heavy casualties on terrorists along with those protecting them. 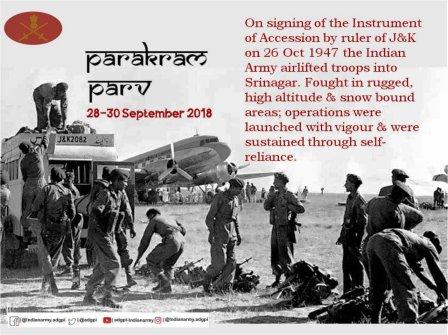 The second anniversary of the surgical strike will be commemorated by the Indian Army as the Parakram Parv or the Surgical Strike Day during September 29 - 30, 2018 to showcase the gallant action of brave Army in the conduct of Surgical Strikes on September 29, 2016.

The Day will also be marked to remember the sacrifice of soldiers during the 'Uri incident'.

Events to take place during the commemoration

• Various events will be held at important military stations to commemorate the second anniversary of Surgical Strikes.

• An exhibition will be held to showcase the valour of armed forces; display of ships, submarines, aircraft, arms, equipment models; playing of video clippings on the surgical strike and naval videos and establishing of digital /selfie walls.

• In addition, ships will be open to visitors and even school and NCC children visits to ships, submarine, air stations are being planned.

• School children are also being encouraged to do letter writing and participate in card or poster making competitions in honour of valiant soldiers.

• A band display and bugle call is planned on September 29 to honour the fallen soldiers at the ballard pier memorial.

• The multifarious event is planned by the Navy to be held at Mumbai and Goa over a period of two days in the Western Naval Command.

• The venue for the exhibition of various stalls and video walls is at ballard pier/cruiser wharf in naval dockyard. The entry to cruiser wharf will be through tiger gate.