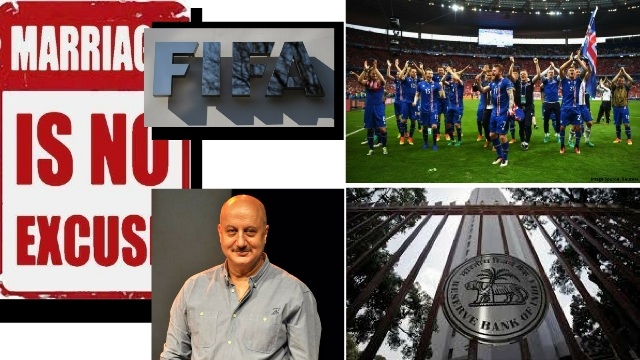 Anupam Kher on 11 October 2017 took charge as the Chief of Film and Television Institute of India (FTII), Pune.

Kher has appeared in over 500 films including acclaimed international films such as the 2002 Golden Globe nominated Bend It like Beckham, Caution, Golden Lion-winning Lust and the 2013 Oscar-winning Silver Linings Playbook.

Iceland created history on 9 October 2017 by qualifying for the 2018 World Cup. This is the first time that Iceland qualified for the World Cup.

Gylfi Sigurdsson and Johann Berg Gudmundsson scored 2-0 against Kosovo to bag a spot in Group I of UEFA World Cup Qualifying. With a population of barely 330000, Iceland became the smallest country to clinch a position at the 21st FIFA World Cup.

The previous smallest country to have reached the World Cup was Trinidad & Tobago which had a population of 1.3 million.

The Apex Court of Country Supreme Court struck down the provision of criminal law that legalized sex by a spouse with his minor wife between the age of 15 to 18 years in a child marriage case.

The apex court said the exception in the rape law was contrary to the philosophy of other statutes and violates the bodily integrity of a girl child. The court also ruled that the exception given to this is violative of Article 14, 15 and 21 of the Constitution.

The decision came in the light of Section 375 of the Indian Panel Code which states that sex with a girl less than 18 is Rape.

The Federation Internationale de Football Association (FIFA) has decided to suspend the Pakistan Football Federation (PFF) with immediate effect in accordance with the verdict of the Bureau of the FIFA Council on 10 October 2017 on account of undue third-party interference.

The decision from Bureau of the FIFA council came in the light of the fact that the PFF offices and its accounts remain in control of a court-appointed administrator, which amounts to a violation of the PFF commitment to manage its affairs independently and without pressure from any third parties in accordance with the FIFA Statutes.

The Reserve Bank of India (RBI) has decided to launch a financial literacy drive in 80 blocks in 9 states on a pilot basis to educate people on e-transactions, formal sector borrowings and insurance purchases.

The pilot project will be commissioned in 9 states including Maharashtra, Chhattisgarh, Bihar, Odisha, Karnataka, Telangana, Andhra Pradesh, Haryana and Uttar Pradesh. Six non-governmental organisations registered with the Depositor Education and Awareness Fund have been selected to execute the pilot project in collaboration with banks.