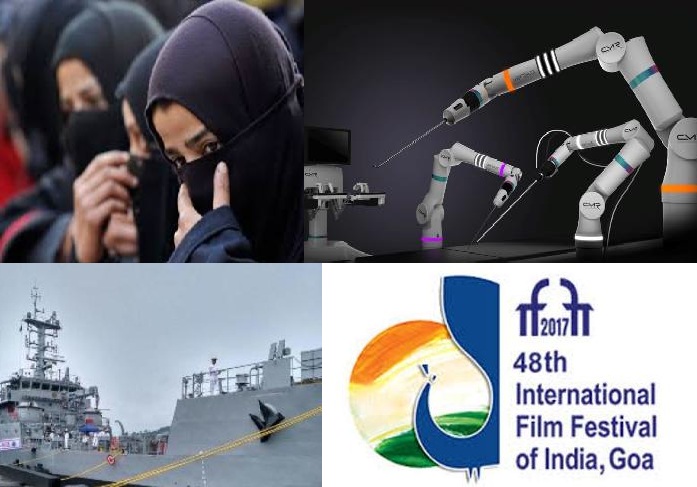 Supreme Court on 22 August 2017 set aside the practice of divorce through triple talaq among Muslims, terming it unconstitutional, illegal and void. In a 3:2 majority judgment, the apex court held that triple talaq is against the basic tenets of Quran and hence unacceptable.

The three judges also said the triple talaq is manifestly arbitrary and violative of the Constitution and must be struck down.

While Justices Kurian Joseph, RF Nariman and UU Lalit held triple talaq as violative of the Constitution, Chief Justice JS Khehar and Justice S Abdul Nazeer were in favour of putting on hold for six months the practice and asking the government to come out with a law.

The Indian Navy on 21 August 2017 inducted a landing craft utility ship, LCU L52. The ship will be deployed for a variety of activities including transporting battle tanks and other heavy weapons systems.

The ship - LCU L52 - was commissioned by Lt Governor of Andaman and Nicobar Islands Jagdish Mukhi at an event in Port Blair. The Navy said in a statement in New Delhi that LCU L52 is the second Landing Craft Utility (LCU) Mk-IV class to be inducted into the Indian Navy.

The Information and Broadcasting (I&B) Ministry on 21 August 2017 constituted a 40-member 'preview committee' with filmmaker Vivek Agnihotri as its convenor to select movies for the international film festival at Goa.

An official statement in New Delhi said other members of the new committee include Agnihotri's wife and actress Pallavi Joshi, author and Padma Shri-awardee Narendra Kohli and actress Hrishitaa Bhatt. Film editor Aarti Bajaj, film critic and screenwriter Khalid Mohamed, and film director Aniruddha Roy Chowdhury are among the other members of the newly-constituted committee.

The robot was developed by a team of 100 scientists and engineers using low-cost technology originally developed for mobile phones and space industries. Versius is controlled by a surgeon at a console guided by a 3D screen in the operating theatre.

K Chandrashekhar Rao, the Chief Minister of Telangana, was selected for the prestigious Global Agriculture Leadership Award 2017 by the Indian Council of Food and Agriculture (ICFA) on 21 August 2017.