India and China have agreed to withdraw their troops from Doklam, bringing an end to the 70-day long bitter standoff in the border region. 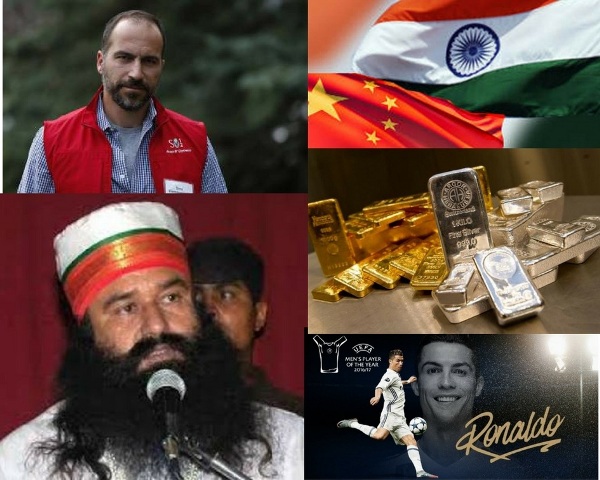 The sentence was pronounced in relation to a 15-year-old rape and sexual exploitation case. The quantum of punishment against the rape convict Dera Saccha Sauda Chief Gurmeet Ram Rahim Singh was announced by the CBI Court in Sunaira Jail on the outskirts of Rohtak, where the Dera chief was kept in judicial custody.

India and China on 28 August 2017 agreed to withdraw their troops from Doklam, bringing an end to the 70-day long bitter standoff in the border region.

India said the breakthrough was reached by diplomatic talks. Indian and Chinese troops were engaged in a standoff at Doklam in the Sikkim section since June 2017 and this standoff led to an escalation in bilateral tensions. The conflict saw over 300 soldiers from each side confronting with each other on the Doklam plateau.

Real Madrid's Cristiano Ronaldo in August 2017 was named the 2016-17 UEFA Men’s Player of the Year Award.

Ronaldo surpassed Lionel Messi and Gianluigi Buffon to win the prestigious award. The famed footballer picked up the trophy for the second consecutive season and third time in total, having also received the accolade in 2013-14.

On the other hand, Lieke Martens was named the 2016-17 UEFA Women's Player of the Year.

Dara Khosrowshahi was on 27 August 2017 appointed as the Chief Executive Officer (CEO) of the  Uber Technologies Inc. His appointment was approved by the Uber Board.

Khosrowshahi, former CEO of travel company Expedia Inc., will be responsible for improving Uber's image by fixing tussles among investors, rebuilding employee morale and creating a profitable business after seven years of losses.

He succeeds Travis Kalanick, Uber's co-founder who was expelled as CEO in June 2017 after shareholders representing about 40 per cent of the company's voting power signed a letter asking him to resign amid growing concern over his behaviour.

The Directorate General of Foreign Trade (DGFT) in the Union Commerce Ministry on 25 August 2017 issued restrictions on the import of gold and silver items from South Korea.

The move was made in a bid to check a sudden increase in inbound shipments of precious metals from the country. The importers will now have to obtain a license from the DGFT for importing gold and silver from South Korea.