The International Consortium of Investigative Journalists (ICIJ) on 5 November 2017 released the Paradise Papers, a slew of documents revealing the offshore activities of some of the world’s most powerful people and companies. ICIJ investigated around 13.4 million leaked files that were obtained by the German newspaper Süddeutsche Zeitung. 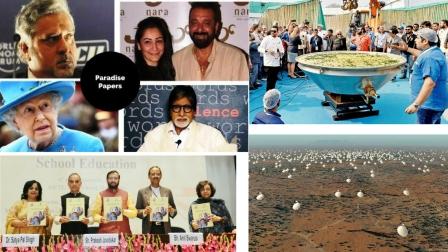 ICIJ releases The Paradise Papers: 714 Indians named in the list

The International Consortium of Investigative Journalists (ICIJ) on 5 November 2017 released the Paradise Papers, a slew of documents revealing the offshore activities of some of the world’s most powerful people and companies.

ICIJ investigated around 13.4 million leaked files that were obtained by the German newspaper Süddeutsche Zeitung.

Among the 180 countries represented in the data, India ranks 19th in terms of the number of names. In all, there are 714 Indians in the list. The list includes some famous names including Amitabh Bachchan, Sanjay Dutt’s wife Dilnashin Sanjay Dutt, popularly known as Manyata, among others.

The world-record ceremony was attended by Union Minister of Food Processing Harsimart Kaur Badal and Patanjali Group founder Baba Ramdev. The Khichdi was distributed among foreign ambassadors and other dignitaries who were present at the world-record moment.

The Khichdi was prepared by a team of 50 people using a 1000 litres stainless steel giant wok (kadhai) in a bid to promote Indian ingredients and cuisine. The team was led by Chef Sanjeev Kapoor, the brand ambassador of The Great Indian Food Street and NGO Akshaya Patra.

India and South would be jointly expanding their efforts in tracing the evolution of galaxies thereby, further strengthening their 20 years of strategic partnership.

India would be participating in the multi-nation Square Kilometre Array (SKA) - a large multi radio telescope project aimed to be built in Australia, New Zealand, and South Africa, where the view of the Milky Way Galaxy is best and radio interference least.

The telescope when built would be the world’s most powerful radio telescope and it would have a total collecting area of approximately one square kilometre.

The Union Ministry of Shipping on 3 November 2017 undertook projects worth Rs 2302 crore for financial assistance under the Coastal Berth Scheme of the Sagarmala Programme.

The Ministry also extended the period of the scheme for three years up to 31 March 2020 and expanded its scope to cover capital dredging at Major Ports and preparation of DPR for coastal berth project.

The workshop was organised by Department of School Education and Literacy, Ministry of Human Resource Development.

The main aim behind this Workshop is to provide holistic education relevant for 21st century India and to bring together key stakeholders from various NGOs, private sector and individuals to deliberate on key themes in the education sector.