The Union Cabinet chaired by Prime Minister Narendra Modi gave its approval for signing a Memorandum of Understanding (MoU) between India and Philippines on agriculture and related fields. 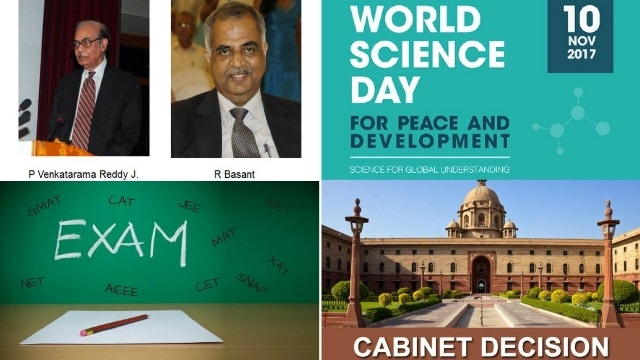 Cabinet approves MoU between India and Philippines on agriculture

The Union Cabinet chaired by Prime Minister Narendra Modi on 10 November 2017 gave its approval for signing a Memorandum of Understanding (MoU) between India and Philippines on agriculture and related fields.

The MoU is expected to improve bilateral cooperation in the field of agriculture, mutually benefiting both India and Philippines. It will promote understanding of best agricultural practices in the two countries, which will in turn help achieve better productivity along with improved global market access.

The World Science Day for Peace and Development was observed across the world on 10 November 2017 with the theme ' Science for Global Understanding'.

The day highlights the significant role of science in society and the need to engage public in debates on emerging scientific issues. It also underlines the importance and relevance of science in our daily lives.

The Union Cabinet on 10 November 2017 approved the appointment of Second National Judicial Pay Commission (SNJPC) for Subordinate Judiciary in the country. The cabinet was chaired by Prime Minister Narendra Modi.

The Commission will be headed by Retired Justice J P Venkatrama Reddi, who formerly served as Judge of the Supreme Court of India. R Basant, a former Judge of Kerala High Court will serve as the member of the Commission.

The Commission mainly aims to evolve the principles that would govern the pay structure and other emoluments of Judicial Officers belonging to the Subordinate Judiciary of the country.