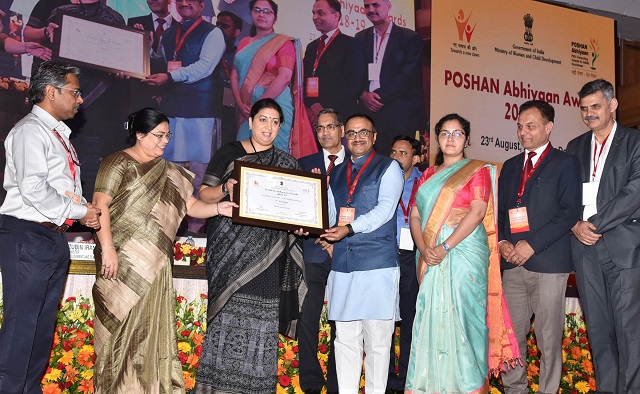 The POSHAN Abhiyaan Awards for 2018-19 were conferred by WCD Minister Smriti Irani in New Delhi on August 23, 2019.  During the awards ceremony, the WCD Ministry recognised significant contributions of the state governments, district teams, block level teams and field functionaries. The Ministry also recognised the contributions of the associated ministries and development partners and they were felicitated with a certificate.

Nine states and three Union Territories were awarded during the ceremony including Himachal Pradesh, Andhra Pradesh, Chhattisgarh, Madhya Pradesh, Rajasthan, Maharashtra, Uttarakhand, Tamil Nadu and Mizoram and Chandigarh, Daman and Diu and Dadra and Nagar Haveli. The states and UTs were given 23 excellence awards comprising a certificate and cash prize worth Rs. 1 crore to the state/UT at 1st position and Rs 50 lakh to the 2nd position for ICDS-CAS implementation and capacity building, convergence, behaviour change and community mobilisation.

For exemplary services, 237 field functionaries comprising Anganwadi workers, Anganwadi helpers, lady supervisors, accredited social health activist (ASHA) and auxiliary nurse and midwives (ANM) were given a cash prize of Rs. 50,000 each, a certificate and a medal. Total 363 POSHAN Abhiyaan Awards were given away with total cash prize of Rs 22 crore and twenty-two certificates of appreciation were also given to the line Ministries and Development Partners.

The WCD Minister, Smriti Irani also launched #ThankyouAnganwadiDidi- a short film on the occasion, which recognises the contribution of Anganwadi workers towards the development of a healthy child.

Further, the WCD Minister highlighted the 5 pillars of POSHAN Abhiyaan, which are as follows:

- Detection and right treatment of Anemia&Diarrohea