The Union Women and Chid Development Minister Maneka Gandhi said that the Ministry is dedicated to address grievances of sexual harassment at work place. 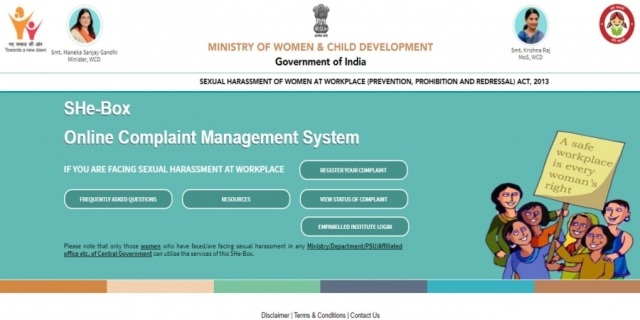 The Union Women and Chid Development Minister Maneka Gandhi on 7 November 2017 said that the Ministry is dedicated to address grievances of sexual harassment at work place.

The minister said this while launching the online complaint management system ‘SHe Box’ against sexual harassment at work place in New Delhi.

The online complaint system was launched in July 2017 for employees of government sector only and around 346 complaints have been registered.

Now, the system has been opened to all women working anywhere in the country.

Besides this, the Minister said that government as well as non-government organizations have been instructed to set up internal harassment committees.

The Women and Child Development ministry launched the online platform -‘SHe Box’- to enable women employees of the Central government to file complaints related to sexual harassment at the workplace.

Once a complaint is submitted to the ‘SHe-Box’, it will be directly sent to the internal complaints committee (ICC) of the concerned Ministry.