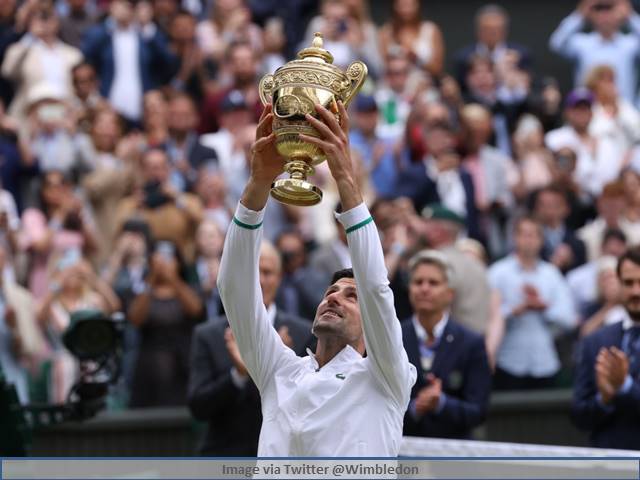 Wimbledon 2021 - Novak Djokovic wins 20th Grand Slam: World No 1 Novak Djokovic continued his dominance on the tennis court on Sunday and defeated Italian Matteo Berrettini to win the Wimbledon 2021 Men’s Final Title. After going down in the first set 6-7, Djokovic came back strongly to win the last three sets with 6-4, 6-4, 6-3 against first-time finalist Matteo Berrettini to secure his 6th Wimbledon Title. In doing so, Djokovic also won clinched his record 20th Grand Slam title, equalling the record of the most Men’s Grand Slams Singles Titles. The Serb Tennis Legend now joins Rafael Nadal and Roger Federer as players to have won most singles titles in men's tennis (20 each).

Wimbledon 2021 as a special tournament for Novak Djokovic as it gave him the opportunity to become Most Men's Grand Slam Singles Titles in History. The Serb has had a phenomenal 2021 and this is the third Grand Slam victory for Djokovic, who earlier in the year had already won Australian Open, French Open. With Wimbledon Men’s Single Title win today, Djokovic has finally caught up with his great rivals Roger Federer and Rafael Nadal and the trio now hold 60 Grand Slam titles between them - 20 each.

Golden Slam on the Radar

In the tennis world, Golden Slam is a rare achievement that not many can dream of achieving. When a player wins all the four tournaments which are part of the Gland Slams, s/he has to also win an Olympic Gold in the same calendar year. Given that Olympics are held only every 4 years, there are not many players who get a chance to win a Golden Slam. But with 3 Grand Slams for the year i.e. Australian Open, French Open and now Wimbledon, already in the bag, Djokovic also features in the Serbian is also on the Olympics team which will give him an opportunity to win a Golden Slam. However, to do so, he will have to win a Gold Medal in Tokyo Olympics 2020 and thereafter also win US Open.