Prison is of great importance to protect our society in a country like India where population is huge. In India, Central Prisons are depicted as rehabilitation centers. Do you know that some of India's prisons are considered to be the largest in the world? In this article, we will study about the 5 largest Central prisons in India. 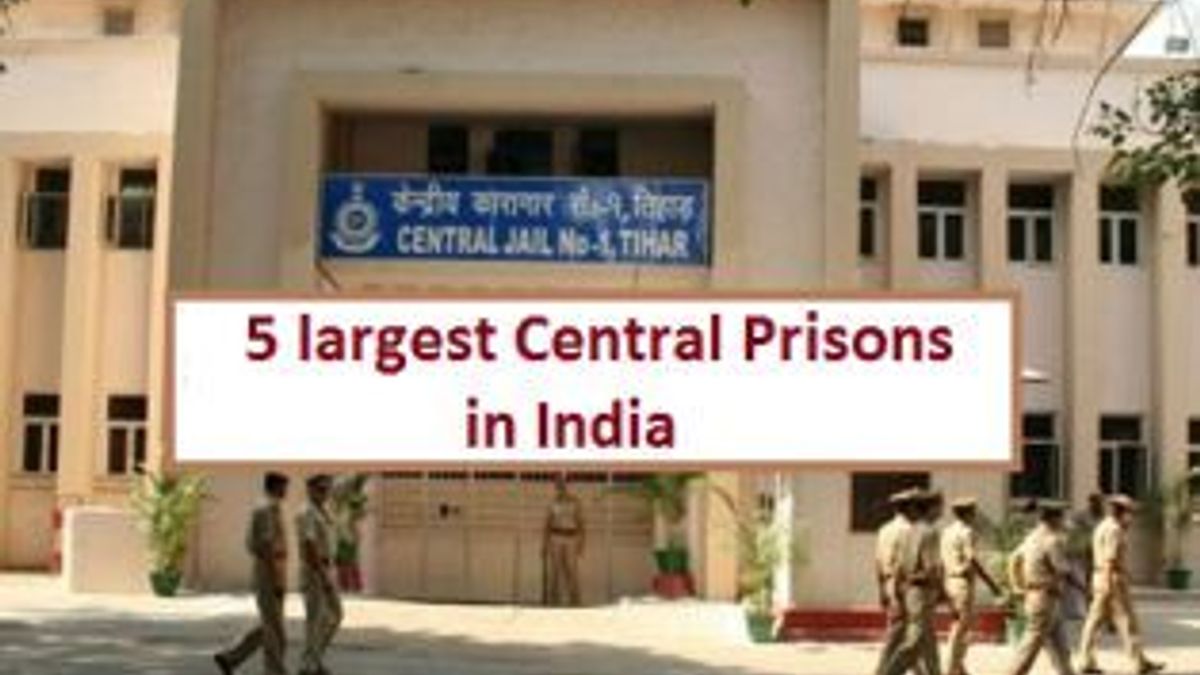 Prison has an important place in the history of the world, because they are used to keep the perpetrators under a limit to protect the society. There are 8 types of prisons in India, the most common and standard prison institutions are central prison, district prison and sub-prison. Central Government of India provides security to the prisoners, looks after repair and reconstruction of old prisons, provides medical facilities, upgradation of Borstal schools, facilities for women criminals, modernization of the prison business etc.
There are large numbers of prisons in the populous country India, some of which are broad in size and thousands of criminals are kept in them. Indian prisons are depicted as the rehabilitation centres. They ensure that every prisoner is taught the values of life and they motivate them to live in a better way. Do you know that some of India's prisons are considered to be the largest in the world? In this article, we will look at the 5 largest prisons in India.
What is Central Prison?
A Central Prison is where a prisoner is sent after being sentenced for more than two years. Many of the Central prisons were built during British era and are still in use. These prisons can accommodate thousands of prisoners and provide facilities for rehabilitation.
5 largest Central Prisons in India
1. Tihar Prison
- The New Delhi-based Tihar prison is the largest prison in South Asia. It is also known as Tihar Ashram and is India's largest prison with maximum security.
- Tihar Prison is in operation since 1957 and has the capacity to accommodate approx. 5200 prisoners. It has 9 different central prisons under it.
- It is a rehabilitation centre rather than a normal prison that seeks to transform the prisoners through education and also provides training in business skills. Not only that, there is an industry within the premises of the prison, which is run by the prisoners. Being part of a business unit increases the self esteem among prisoners and also gives them a chance to improve themselves and become as a responsible citizen of the country. Source: www.timesofindia.indiatimes.com
- Tihar prison uses music therapy, which includes music training sessions and concerts to rehabilitate and improve their prisoners. The prison also has its own radio station which is run by prisoners.
- Prisoner's involvement in sports activities within the prison has made a major leap in several years with inter-ward and inter-jail competitions twice a year.
- In all the prisons, sports such as Volleyball, Cricket, Basketball, Kho-kho, Kabadi, Chess, Carrom etc. are organized in the winter as a festival of sports, known as "Tihar Olympics". Celebrities and famous personalities are invited from the field of sports and culture, which boost the prisoners' confidence.
2. Yerwada Prison Source: www.worldblaze.in.com
- The Yerawada central prison is the largest prison in Maharashtra and is one of the largest prisons in South Asia. It is located in Pune.
- The Yerwada Open prison is also located within the campus of Yerwada central Prison. This prison is spread over 512 acres.
- During the Indian independence movement in the 1930s and 1940s, many famous personalities like Mahatma Gandhi were imprisoned in this prison.
- It holds approx 3,600 prisoners, which is spread from various barracks and security zones.

Do you know about the Battle of Bhima Koregaon and its significance
3. Puzhal Central Prison Source: www.frontline.in.com
- Located in Tiruvallur near Chennai. It is one of the largest prisons in India.
- This prison became functional in 2006 and can accommodate more than 3,000 prisoners. It has three building-complexes i.e. one each; for remand prisoners, for convicts and for women.
- It is spread over an area of 212 acres.
4. Naini Central Prison Source: www.blog.pardesilink.com
- Naini central prison has an open prison also which is located in Naini near Allahabad in Uttar Pradesh,
- It is the fourth largest prison in India.
- It was constructed during the period of British rule in India. It has the capacity to hold approx. 3000 prisoners.
5. Rajahmundry Central Prison Source: www.i.pinimg.com
- Rajahmundry central prison is considered to be the oldest prison and the country's fifth largest prison. It is located in Rajahmundry, Andhra Pradesh.
- In 1602, the Dutch had built a fort in Rajahmundry. The British Empire converted it in a prison in 1864 and then it was converted into a central prison in 1870.
- This prison is spread over an area of 196 acres and consists of 37 acres of buildings. It has the capacity to hold approx. 1864 prisoners.
From the above article we have seen India’s 5 largest Central Prisons with its features.

What is the importance of Chabahar Port for India