Arvind Kejriwal Biography: As COVID-19 cases are increasing day by day. Aam Aadmi Party (AAP) leader and Delhi's Chief Minister has gone for self-quarantine due to fever and sore throat. He will take a coronavirus test and has isolated himself at his official home in Delhi. Let us have a look at Arvind Kejriwal's early life, family, education, political journey, etc.

Arvind Kejriwal Biography: Current Delhi CM Arvind Kejriwal according to the officials is a diabetic and was feeling unwell since 7 June, 2020 afternoon. After attending the Cabinet meeting on 7 June, 2020 (Sunday), he did not attend any meeting after that. He is holding most of his meetings through video conferencing from his official residence for the past two months.

Popularly known as "Aam Aadmi"(common man). He is an Indian politician, social activist, and former bureaucrat. Also known for an important role that he played in drafting the Jan Lokpal Bill.  In 2006, he won Ramon Magsaysay Award. In 2012, he published a book named Swaraj. He believes in simplicity and loves to do work on his own. He believes in hard work. First, we will see a glimpse of his early life, family and education.

He was born on 16 August, 1968 in Bhiwani, Haryana in an upper-middle-class family. He is the first of the three children of Gobind Ram Kejriwal and Gita Devi. His father completed graduation from Birla Institute of Technology, Mesra and was an electrical engineer. Arvind Kejriwal spent his childhood days in towns like Ghaziabad, Hisar, and Sonepat. He did his schooling from the Campus School in Hisar and Christian Missionary Holy Child School at Sonipat.

He gave the IIT-JEE exam in 1985 and scored 563 All India Rank (AIR). In 1989, he did mechanical engineering from the Indian Institute of Technology, Kharagpur. In Kolkata, he had spent some time at the Ramakrishna Mission and Nehru Yuva Kendra. In 1989, he joined Tata Steel, Jamshedpur. He took leave of absence from the company for the preparation of Civil Services examination.

Finally, in 1992, he resigned from the job and in the same year, he cleared the Civil Services examination and joined the Indian Revenue Service. After doing service, in 2006, he resigned from the post of Joint Commissioner in the Income-Tax Department. Do you know when he was working with the Income Tax Department; he assisted in forming the NGO named Parivartan in December 1999. 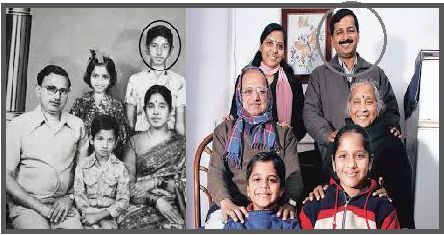 He married his batch mate Sunita from the National Academy of Administration, Mussoorie. She is an IPS officer. They are parents of two children - Harshita (daughter) and Pulkit (son).

Together with Manish Sisodia and Abhinandan Sekhri, Arvind Kejriwal established the Public Cause Research Foundation in December 2006. The prize money of Ramon Magsaysay Award was donated by him to the foundation. Prashant Bhushan and Kiran Bedi served as the Foundation's trustees with the three founders.

Arvind Kejriwal: How he joined politics?

To form India Against Corruption Group (IAC), he joined various activists including Anna Hazare and Kiran Bedi in 2011. It demanded the enactment of the Jan Lok Pal Bill.

The difference of opinion arose between Anna Hazare and Arvind Kejriwal. As, Hazare wanted the Jan Lokpal movement to be neutral but Kejriwal felt that to make a difference, it is necessary to get involved in politics. The move of Kejriwal was supported by Shanti Bhushan and Prashant Bhushan but Kiran Bedi, Santosh Hegde opposed it.

As a result, Arvind Kejriwal announced the formation of a political party on the birth anniversary of Mahatma Gandhi on 2 October, 2012. He formally launched the party on 26 November, 2012, the day when the Constitution of India was adopted in 1949.

The party was called as Aam Aadmi Party (AAP) or the Common Man's Party.

On 4 December, 2013, the party contested elections for the first time for the Delhi legislative assembly. Sheila Dikshit was defeated by Arvind Kejriwal in the New Delhi assembly constituency, who had been the Chief Minister of Delhi for three successive terms. On 28 December, 2013, Arvind Kejriwal was first sworn in as the Chief Minister. In February 2014, he resigned from the post and governed Delhi for only 49 days.

After resignation, he announced that he would not contest a seat in the 2014 Lok Sabha elections. But members of the party persuaded him to change his mind and as a result on 25 March, he agreed to contest against BJP prime ministerial candidate, Narendra Modi, from Varanasi. He lost the contest by around 4 lakh votes.

The Election Commission of India dissolved the Delhi Legislative Assembly after 9 months of the Governor's Rule. That is Delhi had a date with fresh elections. He led AAP and started making strategy for the elections. 62 candidates list was released initially for the elections. Later, eight other names were added to the list. In 2012 elections, the party fielded its candidates in all 70 constituencies of Delhi as compared to 69. At that time, AAP raised funds for campaigning and also received funds from the public. Arvind Kejriwal gained popularity via social media.

In the 2015 Delhi Assembly elections, Kejriwal led Aam Aadmi Party to win 67 of the 70 constituencies, leaving the BJP with three seats and INC with none. He was again elected from the New Delhi constituency, defeated Nupur Sharma of BJP by around 31,583 votes. On 14 February, 2015, he took oath as Delhi's Chief Minister for a second time at Ramlila Maidan. Since then his party passed the Jan Lokpal Bill though with some differences.

- In 2005, the IIT Kanpur presented him with the Satyendra L. Dubey Memorial Award.

- In 2009, the IIT Kharagpur bestowed him with the Distinguished Alumnus Award.

- In 2009, Association for India's development awarded him a grant and fellowship.

- In 2010, the Economic Times Awards for Corporate Excellence awarded Arvind Kejriwal, along with Aruna Roy, the Policy change Agent of the Year award.

- In 2011, the Indian of the Year award by NDTV to Arvind Kejriwal and Anna Hazare.

'Swaraj' book is written by Arvind Kejriwal. In the book, he questioned the present democratic system in India and suggests the way people can achieve true Swaraj (self-rule). The book proposes Gandhi's concept of Swaraj or "Home-rule" model of governance.

'A Man With a Mission - Arvind Kejriwal' by Little Scholarz Editorial

The Disruptor: Arvind Kejriwal and the Audacious Rise of the 'Aam Aadmi' by Gautam Chikermane and Soma Banerjee

Arvind Kejriwal: Facts at a Glance

Profession before joining politics: Worked for the Indian Revenue Service (IRS) as a Joint Commissioner in the Income Tax Department.